Horizon Zero Dawn – Launch Trailer | PS4https://www.playstation.com/en-us/games/horizon-zero-dawn-ps4/ In a world where Machines dominate the earth and mankind lives on in primitive tribal societies, one woman sets out to find her destiny among the remnants of the ancient past. As Aloy, you must brave the Machine-infested wilderness and unearth secrets that lie buried deep within the earth. Will you embrace your calling……2017-02-24T14:00:09.000Z

Guerrilla Games’ Killzone FPS dealt with a future torn apart by faction warfare. Within its bleak world lied an avalanche of futuristic tech that was used to gain the advantage for one’s respective affiliation. Now that that series has been put on hold, Guerrilla Games has decided to craft another experience that sticks to the theme of an alternate future. But Horizon Zero Dawn sets itself apart from the developer’s past projects by offering up a 3rd-person, open-world trek through a wondrous setting. The game’s mix of living the tribal life, traversing through nature’s most scenic locales and battling robotic animals makes it one of PS4’s finest new IP’s.

When you first enter Horizon Zero Dawn’s universe, you get introduced to two tribal outcasts – an older gentleman named Rost and Aloy, the main character who’s initially displayed during her time as a baby. That introduction perfectly segues into the growth of Aloy as she trains to take part in a tribal tradition that grants her the chance to become one with the people who shunned her. When that event concludes, the plot opens up wide and puts you on an enthralling journey that’s chock full of shocking occurrences. The tale being woven during main missions and a bevy of side missions are all strong thanks to strong voice acting and character development. Horizon Zero Dawn’s world is an interesting character unto itself, too – countless robotic creatures wander the wildlands, villages display a return to tribal society and relics of the old mechanical world still exist.

Aloy seeks the answers she’s wanted since her younger years by becoming a expert hunter. Stepping into her shoes and donning her armor means you’ll need to learn how to take down the vicious mechanical beasts that roam the land. Aloy’s gear comes in the form of a trusty bow and arrow, a spear, a tripwire trap, various explosives etc. Over time, you’ll begin to open up Aloy’s ability set and arm her with a wealth of helpful equipment. Much of the fun derived from Aloy’s hunts is her discovery of more skills and robotic wildlife. It feels amazing to figure out the best approach to taking down whatever/whomever you encounter. Aloy can rely on the elements of stealth, close-up melee and hacking to keep her alive; there’s so much to do and enjoy due to how varied Horizon Zero Dawn’s set of mechanics turn out to be. Aloy’s a fascinating character to follow, plus actively participating in her growth as a hunter stays fun until the very end.

Horizon Zero Dawn truly makes the case for gamers to head into the new world of 4K gaming and invest in new-gen hardware. Guerrilla Games obviously took advantage of the PS4’s tech; it’s quite evident since every part of this new IP looks incredible. You’ll find yourself standing still while in the middle of some newly discovered area and gaze at everything happening within it. The snow covered mountains, steel-filled robot factories, old-world villages and massive creatures that you hunt are all visually pleasing. Guerrilla Games deserves all the credit in the world for producing an open-world game that regularly stays strong in the graphics department.

Introducing a new IP to the world of gaming is a tough task that many game developers have failed at. But Guerrilla Games has succeeded at this task, no doubt. Horizon Zero Dawn presents an experience that’s a rousing example of doing open-world gaming the right way. Aloy is a fascinating heroine and the alternate future she finds herself in offers players a mystery they’ll want to solve. Thankfully, the tale being told is wonderfully told and the individuals you’ll meet along Aloy’s path to the truth are all interesting. Gameplay wise, there’s so much to see, hunt, gather and hack. And the amazing visual fidelity of this new IP must be applauded. Horizon Zero Dawn will be looked back on fondly and remembered as a shining beacon of the PS4’s games library. 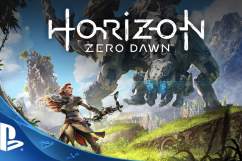 Read More
Game Review, Games, PS4, PS4 Pro
Guerrilla Games' foray into open-world adventuring is a success thanks to the excellence that is Horizon Zero Dawn.