As we get closer and closer to the launch of Injustice 2, the game’s story becomes way more clearer. The newest trailer to get revealed to us all is the 3rd part in the “Shattered Alliances” plot preview video series. This latest piece of in-game footage shows off two main story moments – Supergirl’s early origins and how she came to Earth, plus the return of the 1st game’s villain known as Black Adam. What’s even better about this new story trailer is the sneak peek we get of Black Adam’s finishing move, which he chooses to pull off on a fully grown Supergirl. Make sure you watch it in all its pyramid destroying glory. Enjoy the new Injustice 2 trailer, folks. We’re almost there, as in we’re inching ever so closer to the game’s release. 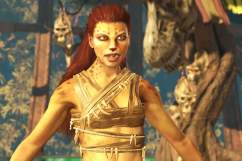