The South Park Twitter account posted a tweet that strongly hints at a possible Nintendo Switch version of South Park: The Fractured But Whole. It could also be about Winter Storm Stella but we’re going to assume the opposite here.

The Fractured But Whole is the followup to the 2014 RPG South Park: The Stick of Truth. Stick of Truth was originally released for Xbox 360, PS3 and PC and will receive a PS4 and Xbox One release to coincide with the release of its sequel. It’s possible a Nintendo Switch version is coming now based on this tweet.

Ubisoft, the developer behind the two South Park games, has already pledged support for Nintendo’s new console. Just Dance 2017 was a launch title for the Nintendo Switch and the company plans on bringing Rayman Legends and Steep to the console in the coming future. Rayman Legends was originally supposed to be a Wii U exclusive before it received versions on every console.

South Park: The Fractured But Whole is scheduled for a worldwide release later this year. We’ll keep an eye out for any announcements regarding a Nintendo Switch version. 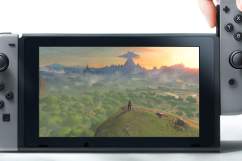 Nintendo of America Boss Talks About Biggest Concerns With the Switch