Another year, another Call of Duty game, but this year is different as it marks a return to the WWII arena that the series built its reputation on. The Call of Duty franchise took some twists and turns after its departure from WWII. Since leaving, the series have given us modern warfare, future warfare and super future warfare. The latest game in the franchise, Infinite Warfare, was met with heavy criticism from the core fans of the series which could play a factor in going back to WWII. Activision also could have seen the success with Battlefield 1 and decided to a return to past wars would be something the fans would enjoy.

I mean, just take a look at the overwhelming number of dislikes (over three million) this official trailer has. Here’s to hoping WWII will be a return to classic Call of Duty. Here are the five fast facts you need to know about Call of Duty: WWII. We’ll be sure to get this post updated as more information becomes available.

Call of Duty: World at War Was The Last Time We Saw A WWII Call of Duty Game

It’s been nine years since we’ve seen World War II in a Call of Duty game. This game was building off the success that was Call of Duty 4: Modern Warfare. The game features the same engine and leveling up system that made that game the runaway success it was.

The game was met with a positive response as it was basically Modern Warfare set in World War II. The game is probably best known for creating the Nazi Zombies minigame, something that has gone on to remain a staple in future Treyarch Call of Duty titles. With the series returning to WWII, it seems like a perfect time for a return to the original Nazi Zombies. It looks like the stream has confirmed Nazi Zombies are coming back for this game.

World at War ended up being the first game in the Black Ops story line and spawned three sequels. If you still have a copy of the game lying around somewhere for your Xbox 360, don’t forget that the game is now backwards compatible with Xbox One.

Call of Duty: WWII Will Be a Return To Traditional “Boots on the Ground” Combat

As part of a conference call with investors, chief operating officer Thomas Tippl of Activision confirmed the series was returning to a more traditional setting, according to GameSpot.

“In 2017, Activision will take Call of Duty back to its roots and traditional combat will once again take center stage,” Tippl said. “This is what our dedicated community of Call of Duty players and Sledgehammer Games, which has been developing this year’s title, are the most excited about.”

Tippl mentions how the futuristic setting received many complaints from fans of the franchise but he doesn’t regret taking the games there.

“It’s clear that, for a portion of our audience, the space setting just didn’t resonate,” he explained. “We have a passionate, experienced studio deeply committed to this direction, and despite the risks we saw, we believe it is important to consider the passions of our game teams in deciding what content to create.”

The official game reveal confirms the series returns to its fast-paced, ground based roots. Some weapons that will be returning include the M1 Garand, STG-44, M190342 and MG 42 among many more.

The story line follows the US 1st Infantry Division as they fight their way through the European theater. The D-Day invasion of Normandy will be included in the game. The years are taking place between 1944 and 1945. Urban combat will happen in France and Belgium as players push their way to Germany. Josh Duhamel is the voice of Sgt. William Pierson in the single-player campaign. headquarters

The multiplayer will be shown in full at E3. Players will be able to hang out in a central hub called Headquarters that is similar to how Destiny and Dragon Ball Xenoverse have their hub set up.

Sledgehammer Games Will Be Developing The New Title

The company was formed in 2009 by Glen Schofield and Michael Condrey, two former members of EA’s Visceral Games, the studio behind Dead Space.

There isn’t a whole lot to look at regarding Sledgehammer Games’ volume of work but it’s probably safe to say if you liked how Advanced Warfare played, you’re in good hands with this developer.

The “About Us” section of their site promises players an entertaining experience with their games.

With our latest releases of Call of Duty: Modern Warfare 3 and Call of Duty: Advanced Warfare, our focus is providing players with a fun and entertaining experience in gaming. We could not be more proud of the work we’ve accomplished and the exciting future we have ahead.

If these leaks are true, and we’ll be able to confirm them in a short bit, then the Pro Edition looks like it’ll come with a steelbook case and the season pass. We’ll have more information when the game is officially revealed with the prices.

We’ll get this updated when the information is officially announced.

Charlie Intel received pictures of leaked boxout that supposedly shows the release date and the description of the game. It also reveals a beta will be available to those who pre-order the game. Here is everything it says:

Game Description: Call of Duty returns to its roots with Call of Duty: WWII–a breathtaking experience that redefines World War II for a new gaming generation. Land in Normandy on D-Day and battle across Europe through iconic locations in history’s most monumental war. Experience classic Call of Duty combat, the bonds of camaraderie, and the unforgiving nature of war against a global power throwing the world into tyranny.

Campaign Description: Call of Duty: WWII tells the story of an unbreakable brotherhood of common men fighting to preserve freedom in a world on the brink of tyranny. Players enlist in a gritty intense journey through the battlegrounds of war. The campaign features bold, lifelike visuals with the kind of blockbuster cinematic authenticity that only Call of Duty can deliver.

Multiplayer Description: Call of Duty: WWII multiplayer engages players grounded, fast-paced combat across many of World War II’s most iconic locations. Players will also enjoy exciting new ways to interact and socialize with their friends and the Call of Duty community. 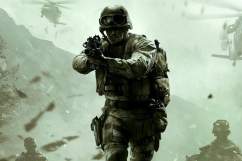