Mario Kart 8 Deluxe for the Nintendo Switch is the fastest selling game in the franchise with over 459,000 combined physical and digital sales in the U.S. on launch day.

According to a press release from Nintendo, the previous record for the highest first-day sales was held by 2008’s Mario Kart Wii with about 433,900 in sales in the U.S.

The news comes after the Nintendo Switch became the fastest selling console in Nintendo history with more than 906,000 units sold in March. According to Nintendo’s Fiscal Year Earnings, the console has sold 2.74 million units with software sales reaching 5.46 million units. The Legend of Zelda: Breath of the Wild sold a total of 3.84 million units composed of 2.76 million Switch version units and 1.08 million Wii U version units.

Mario Kart 8 Deluxe is also a critical success with a metacritic score of 93 based on 64 reviews and a user score of 8.8 based on 243 ratings. 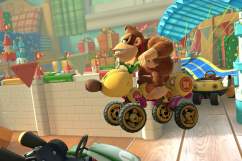