Starting in 2015, Bethesda decided to join the E3 press conference party. It makes a ton of sense for them to continue this trend since they’ve morphed into one of the bigger video game publishers out right now. If you’ve been living in a cave for far too long, just know that Bethesda are the ones behind The Elder Scrolls, DOOM, Dishonored, The Evil Within, Fallout and a host of other respectable properties. For the 2017 edition of their press briefing event, rumors are running rampant about a ton of sequels and new IP’s that everyone hopes come true.

Judging by the games that were shown last year, you should expect to see some updates on Bethesda’s VR lineup. The DOOM and Fallout 4 VR games should get plenty of stage time. Maybe there’ll also be some sort of DLC announcement for Dishonored 2 and the recently released Prey. Plus Quake Champions is still a hot commodity at the moment, so Bethesda will definitely spend some time going over it’s latest gameplay footage. Cross your fingers and pray that the following games become a reality, though:

– Wolfenstein: The New Colossus
– The Evil Within 2
– a new Elder Scrolls (a tease trailer at least?) 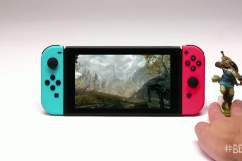