God of War, made another appearance at Sony’s E3 press conference this year. This time we have a trailer which gives us a better idea of how the game plays.

The game was first announced at Sony’s press conference last year. The game retains its beat-em-up, action roots but with a more action-adventure feel akin to The Last of Us. It also swaps out its Greek mythology roots for Norse mythology and the story will focus heavily on the strained relationship between protagonist Kratos and his son.

As Gamesradar writes, you can upgrade abilities with an XP-based system as wll as resource collection. Combat has also been moved to the trigger buttons and Kratos’ son will help you in battle.

The game is being developed by Santa Monica Studio and is directed by Cory Barlog. Barlog worked on the first installment of the series and directed the second one.

The Verge writes that the trailer actually has interesting implications for the story:

The new trailer ended with Kratos and Atreus meeting a giant sea serpent that could very well be Jörmungandr, one of Loki’s three children and an instrumental player in the bringing about of Ragnarök, Norse mythology’s apocalyptic event. This bodes well for theories that Atreus is secretly an enemy of thunder god Thor, meaning Kratos will continue to serve as an antihero who’s working against the protectors of the known universe as he did in the original trilogy.

God of War made its debut in 2005 as a hack-and-slash game taking inspiration from ancient Greek legends. The game had multiple sequels with the last game, God of War: Ascension, being released in 2013.

Sony showed off a bunch of projects this E3, including Spider-Man, Uncharted: The Lost Legacy, God of War, Detroit: Become Human, and more. Most of them are titles we say during last year’s press conference but we got new trailers and some new information. 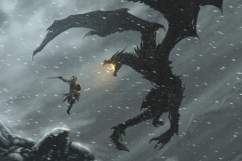 ‘The Elder Scrolls V: Skyrim’ is Coming to Playstation VR