You may have noticed a patch when you booted up Mario Kart 8 Deluxe today. The patch targets mostly online functions but it does include an update that allows players to unlock a new suit for their Mii driver using Pikmin amiibo. There’s a new Pikmin amiibo coming out soon so it will likely work with the game as well.

This is the second patch to hit Mario Kart 8 Deluxe since launch, with the first being back in May. The update should install automatically if your Nintendo Switch is connected to the internet. You’ll know the update has installed based on the version number displayed in the title screen. You must download the update to play online since the update mostly targets the online mode. 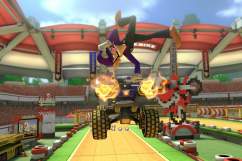