For many, the Pokemon Go Fest in Chicago has been pretty much a big disappointment so far. With server and connectivity issues plaguing the festival, many trainers chanted “FIX THE GAME!” while waiting in the park. When Niantic CEO John Hanke came on stage, he was booed. He tried to assure players that they’re working on the issues, but the problems seemed far too symbolic of issues that have plagued Pokemon Go all along.

Here are some of the best memes, tweets, and reactions from trainers showing just how frustrated they are with the “Festivities.”

#PokemonGOFest @FSU_ATL RIP Pokemon go. Feel bad for everyone who traveled across the world for this event :( pic.twitter.com/ZPaZbEcAUL

The current status of the fest is causing people to connect it to the Fyre Festival. that’s not good.

So glad I missed Fyre Fest 2.0… I meant #PokemonGoFest! Feel bad for the people who paid for tickets though. They are getting shafted.

Or just your traditional sinking ship:

This is pretty much Niantic right now:

Oh, and the live stream? Don’t even bother. They’re not even showing the crowds. Just a logo.

Um @PokemonGoApp the stream for #PokemonGOFest could be a little less boring, IMO… Can't you show us something other than a title screen? pic.twitter.com/hbqBPUf3CL

Currently 38k people watching a screen saver on the #PokemonGOFest YouTube stream. Why in the world isn't Niantic communicating w/people.

Maybe the saddest part is that this wasn’t really unexpected. Pokemon Go has been having server issues for awhile. So what’s happening now isn’t hugely surprising.

Others think we all need to just quit complaining:

But let’s face it… Most people are going to complain. And why not? Shouldn’t Niantic have been prepared for this? Meanwhile, some people are getting pretty creative. I would buy this shirt:

I should create a #PokemonGoFest t-shirt that says "I WAS THERE… IN LINE!"

If you can believe it, some people are already talking about trying to get refunds not just for their tickets but their travel expenses too. Some people want to file lawsuits.

#pokemongofest #epicfail. No one is able to play. Poor execution. Hope they refund everyone and throw in some free stuff.

But as one trainer pointed out, if Legendaries are ultimately released, all these problems will be forgotten. Unless the server crashes and no one can fight or catch a legendary:

Despite the failures at Pokémon Go Fest if #Niantic gets the Legendary Pokémon out tonight, all will be forgotten/forgiven #PokemonGOFest

Not everyone agrees though:

But for now, this is the reality: 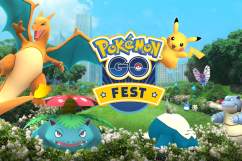 Read More
Niantic, Nintendo, pokemon go, Video Games
Well, Pokemon Go Fest is a disaster so far and who knows when it will be fixed. So trainers are now busy catching all the best memes & tweets. See them here.