Screenshot by Jack Fennimore Pearl and Marina are the hosts of Splatfest.

Splatoon was one of my favorite games of 2015. Being a game where the goal is to cover the area in as much ink as possible instead of racking up kills, the game reinvigorated the stale and dreary shooter genre. It was a great game made even better with its stream of free DLC. Add to that its iconic art direction and you have a genuine classic.

And if the Splatfest World Premiere is anything to go by, Splatoon 2 will only continue on the fun of the original.

In an unprecedented move, Nintendo decided to host Splatoon 2’s very first Splatfest event not only a week before its release but for free for everybody with a Nintendo Switch. Players could choose between two teams, Team Cake and Team Ice Cream (aka the best team), and duke it out to see which dessert is the best.

The goal of each multiplayer match is to cover the map with more of your team’s colored ink than the opponent team’s. Taking down enemies forces them to respawn after a delay which can be a huge help, but it’s not the ultimate goal of the game. This means that you’ll not only have to look out for the enemy, but the enemy’s ink and blank spots without any ink. Opponent team’s ink slows you down and you can transform into a squid and swiftly swim through your team’s ink and hide in it for surprise attacks. Your environment changes constantly, forcing you to adapt your tactics.

By far the biggest difference between Splatoon 2 and the original is the fact that you no longer have a second screen. In the Wii U original, you can look down at the Gamepad’s screen to see which areas of the map have which team’s ink and you can even touch a teammate on the map to warp to their position. In Splatoon 2, you have to open up the map by pressing the X button. It takes some getting used to, but it’s still useful.

Weapons include the Splattershot, which fires a stream of goo; the Splat Charger, which fires a charged line of goo that can take out opponents in one hit; the Splat Roller which covers wide areas with ink and makes huge waves of ink; and the new weapon Splat Dualies which allow you to dodge roll. I especially liked the Splat Roller as it gets a new tweak in that if you swing it while jumping, your shoot a vertical wave of ink instead of a horizontal one. It may seem like a small change but it adds some much-needed range to the weapon and creates a path you can swim through. There’s also sub weapons like grenades and a curling bomb that slides on the ground and can bounce off of walls. Specials return as well, which you can charge up as you spread ink. I especially liked the Inkjet, an ink jetpack that lets you shoot bazooka-like projectiles from above.

Presentation is as great as always. I found the music catchier than before and the graphics of course are a lot crisper. While I preferred the more open hub world of the original game, the new one still retains the same amount of charm and detail. I’m also really happy that they retained the Miiverse-like feature where you can share drawings and have them appear as graffiti in levels and as speech bubbles in the hub world.

One interesting thing I found is the food truck in the hub world. The truck lets you buy items that will increase the rate you earn experience and money. There are also items that increases the experience gain for gear and slighting increases the chance of receiving a specific ability when gear levels up. So if you buy the Main-saver Lemon, you’ll have a higher chance of getting the Ink Saver (Main) ability for your gear. According to PVPLive, you buy the items with tickets you earn through single player missions and the Salmon Run PvE horde mode. I can’t wait to try this out in the game as gaining experience and money for leveling up and buying weapons and gear can turn into quite a grind the further you get into the game. And the gear ability items will help with getting gear with the abilities you want without hoping chance is in your favor.

While I so far enjoy the changes they made to the game, there are a few things I found that could have been improved from the original. You still have to exit the group of players you’re in to change gear instead of having loadouts you can switch between. You can switch gear in the multiplayer menu outside of matchmaking, but it would have been a lot more convenient to do so while already in a team or during matchmaking. Also, the minigames from the original can no longer be played on the Gamepad while the game is searching for players. This is a shame as the minigames, while simple, were actually quite a lot of fun and negated the frustration of waiting for the match to start. Minigames will still be a thing in Splatoon 2 and playable outside of multiplayer, but it’s really puzzling that Nintendo will leave out this feature, especially since searching for opponents can feel like it takes ages.

Also, I had connection errors that booted me out of multiplayer lobbies four times over the course of an hour of play. Thankfully the matches themselves were not interrupted. Hopefully this improves when the game launches.

The Splatoon 2 Splatfest demo demonstrates what this game is going for: all of the things you loved in Splatoon but with a new coat of paint and some added tweaks and features. And when the original was such a great game, that’s not a bad thing at all as far as I’m concerned. There’s still tons of content that we weren’t able to access, including the single player campaign, PvE mode, and all the sweet, sweet unlockable gear and free DLC. But I can safely say that Splatoon 2 so far is not only great, but has me hungry for more – almost as hungry as I am for ice cream.

Ice cream is still the best, by the way.

Splatoon 2 will release on Nintendo Switch on July 21, 2017. If you missed the Splatfest demo, don’t worry because Nintendo said that Splatfest content will continue for at least two years after the game’s launch. 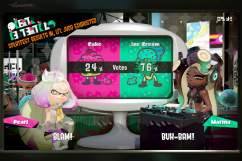