The SNES Classic Edition pre-orders went live today and they were pretty rough on everyone trying to lock one down. Scalpers should be able to have a field day if they managed to snag a few of these rare consoles.

If you’re feeling bummed out about not getting one just know that all hope is not lost. Some retailers have decided to do away from pre-orders altogether and do it the old fashioned way and make you go to the store when the console is officially released. This might mean you have to do some camping out but it’s worth it if you want to secure one of these elusive consoles.

The SNES Mini will be available in our stores on 9/29. There will be no pre-orders for this item. TY!

One of the major retailers that isn’t going the pre-order route is Toys R Us. Toys R Us tweeted out on their official Twitter page that the only way to get the Super NES Classic Edition will be to actually go to the store. As of right now it looks like Toys R Us is the only major retailer going this route. It’s likely that other stores will receive a certain number of units in stock once the Super NES Classic Edition eventually releases in late September. GameStop is one retailer that had pre-orders and will also have in-store stock on launch day.

If you weren't able to snag an SNES Classic today — don't sweat it. We'll have more available on launch day, in store, for walk-ins. pic.twitter.com/ZnAPVsB8Cm

Of course, you can always just try to hold out on stock coming back to allow for a second run of pre-orders to go live. However, with Nintendo being the one sending the shipments, we wouldn’t hold our breath on more stock coming any time soon. This is the same company that announced it wasn’t making anymore NES Classic Edition consoles despite the overwhelming demand for more.

The console will come packed with 21 games, instead of 30 like the NES Classic Edition featured, and will cost $79.99, assuming you can find one that hasn’t been scooped up by a scalper. The official release date for the console is September 29. If you still have some faith, you can keep checking back on all the links we gave in our post here and hope for the best. 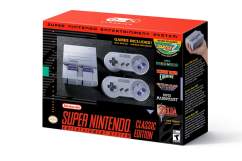