So the reveal trailer for Injustice 2’s Fighter Pack #2 had everyone blown, right?

Thanks to the leaks, everyone had a pretty good idea of two of the DLC roster additions coming soon. But when Dark Horse comics’ Hellboy lit his cigarette onscreen, plenty of fans came unglued. NetherRealm Studios has pretty much mastered the art of creating tons of hype for its fighting game DLC. Judging by the next live stream hosted by Ed Boon’s studio, it appears that Aquaman’s nemesis will be released first. Black Manta (a DC Comics villain who played the background as an environmental interaction in Injustice 2), will now become a playable character. Ed Boon took to Twitter to release a teaser image that alludes to what Black Manta is capable of. You can check out that new pic below:

Black Manta is a pretty technologically advanced combatant. His strengths come in the form of a powerful battle-suit, plus he employs the use of artificial lungs that lets him thrive underwater. You can clearly see one of his special abilities above, which happens to be an optic blast that’s doable thanks to his helmet. And finally, his costume hides an army’s worth of equipment that he’ll probably utilize in Injustice 2. Stay here with us as we check out the debut gameplay footage of Black Manta straight from NetherRealm Studios. 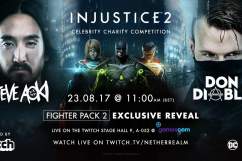