Update – the trailer for Fighter Pack #2 can now be viewed below! We’ll also make sure to post up the gameplay reveal live stream for Black Manta (which is set to hit the web on Sunday, August 27 at 4pm PST/7pm EST).

All the props in the world needs to go out to NetherRealm Studios.

They didn’t waste anytime giving its Injustice 2 fanbase quick access to all the characters featured in the first Fighter Pack. Before the summer came to a close, Red Hood, Sub-Zero and Starfire became readily available. There’s been a whole lot of debates about who the rest of the DLC cast will be (what is known is that Black Manta’s going to be one of them thanks to an Xbox Store leak). During a special Gamescom tournament, no one will have to debate over who the next three characters will be. The reveal trailer for the second Fighter Pack is set to drop during a live Celebrity Charity Competition between Steve Aoki and Don Diablo. During their five match set, Ed Boon and the rest of the NetherRealm Studios team will present the next three members of Injustice 2’s roster.

Steve Aoki’s own foundation (The Aoki Foundation) will be receiving a nice contribution of $5,000 from the tournament proceedings. The Aoki Foundation’s charitable efforts are mainly geared towards advancements in brain science/preservation and regenerative medicine. It also offers financial support to disaster relief, developmental disabilities and animal-rights. What will be featured here is the entirety of the charity tournament and the trailer for Fighter Pack #2.

So stay right here with us and get a healthy helping of what’s coming in the future for Injustice 2. 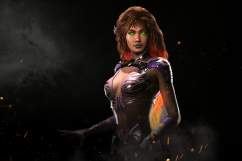