For a few years now, the Madden Mobile game has served as an excellent addition to the home console version and now it will actually serve a bigger purpose with the new title.

Madden NFL 18 introduces the Longshot story mode which will follow in similar footsteps of the NBA 2K story mode where you play as a character who is working towards being drafted by an NFL team. Instead of creating a custom character, players are instead put in control of Devin Wade who starts out as a high school player and works all the way up to the NFL. We don’t have much else to share in terms of how the story works but you can read all the info we have on it right here.

With Madden Mobile you can play through Devin Wade’s prequel story before making the jump into his full journey in Madden NFL 18. This gives players a great reason to try out the mobile game, especially since the full game doesn’t release until later this month. The story mode is the first time a narrative storyline has ever appeared in a mobile sports game.

The Longshot story mode isn’t the only new mode coming to the Madden Mobile game either. Players can look forward to new features such as Welcome to the Greatest Season which will give players access to training drills at Brady Camp and even the option to replay his comeback game in Super Bowl LI against the Falcons.

The new update should be live or coming very soon. The update is bringing the above features along with new stadiums, uniforms, better graphics and many more ways to help you win on the field.

Madden Mobile is a available now on iOS and Android devices. Madden NFL 18 releases August 25 for Xbox One and PlayStation 4. If you want something a little more than the standard edition, you can instead opt for the GOAT Edition which you can read more about right here.

You can check out the the trailer for Madden NFL Mobile 18 below. 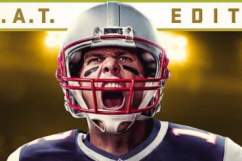