The weekly dose of free Splatoon 2 DLC continues with yet another new weapon being added to the squid-based shooter. The game has already added the Inkbrush, Dualie Squelchies and Sploosh-o-matic into the game and now we have a fourth on the way, just in time for all of the weekend splatting we know you’ll be doing.

The new weapon is called the Splat Brella and we’ve actually seen a variation of it in the single-player campaign called the Hero Brella. This means the Splat Brella will act as a shotgun and deliver short-range bursts of ink that can quickly eliminate your enemy. Also, if you look closely at the handle of the umbrella it resembles a shotgun.

The Splat Brella joins the game August 12 according to Nintendo’s tweet and will come with the Sprinkler sub-weapon and the Ink Storm special. The tweet indicates that it will appear sometime in the early morning but remember that it likely means European time. The Sploosh-o-matic joined the game in an 10 p.m. ET update when the tweet said it was coming the next day.

In case you’ve somehow missed it, the results of the latest Splatfest showed that mayo somehow reigns supreme over ketchup. The popular vote tipped far in ketchup’s favor but the individual victories didn’t do much to back up ketchup’s dominance there. We haven’t received any word on what the next Splatfest will be but we suspect it’ll be announced pretty soon.

Nintendo has promised to keep them Splatfests going for at least two years. This gives us Splatfests for twice as long as its predecessor and it will also be a way to keep players interested. It looks like Nintendo will also be keeping the free DLC rolling as well in the form of new weapons and maps. The last Splatfest gave players a new map to play on called Shifty Station.

Until next time, don’t get cooked, stay off the hook. We know you’ll never get tired of hearing that, right?

Update: We originally stated the weapon was coming tomorrow but Nintendo has confirmed the Splat Brella will be available at 10 p.m. ET. 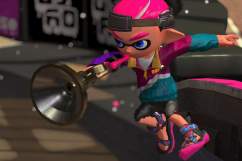