Anyone else watch that Injustice 2 Starfire trailer more times then they’d like to admit?

Don’t worry – there’s no shame in admitting that you guys replayed her jaw dropping super move hundreds of times. Injustice 2’s post-launch content has been pretty cool thus far. Red Hood and Sub-Zero have seemingly fulfilled the high expectations of diehard fans. Starfire was already known to be the final DLC character to be added to Injustice 2 from the first Fighter Pack. And at this year’s San Diego Comic-Con, everyone got to see just how fluid and badass she is during battle. NetherRealm Studios is making sure she gets even more of the spotlight she deserves within the next Watchtower live stream. Like past live stream showcases for incoming characters, this presentation will delve deep into Starfire’s moveset. That means all her normal attacks, special moves, intricate combos and super move will all be explained in full. Plus there’ll definitely be some new footage revealed that relates to Starfire’s custom gear loadouts.

After this live stream concludes, Starfire’s release date should (hopefully) have been announced. When all that information drops, the wait for Injustice 2’s next DLC character should feel a lot less painful. 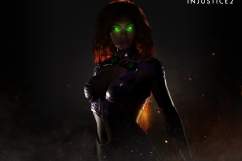