Terraria is known to many as a 2D version of Minecraft but it’s that and so much more. Players have unlimited potential in what they can do as they construct a base and progress further to defeat bosses and collect new items. The worlds in Terraria are randomly generated so there are surprises waiting around every corner.

The near endless possibilities are what makes Terraria a hit on practically every platform it has been released on. One platform that the game is sorely missing from is the Nintendo Switch. Nintendo’s new hybrid console lends itself perfectly to the game as it is able to be played both in portable mode and on the TV. All we know is that the title is coming to the Nintendo Switch but don’t know much more outside of that.

Today we were treated to a glimmer of hope that the title is arriving sooner rather than later. The official Terraria twitter page confirmed the title is still on track for a release some time in 2017 and it will also come with version 1.3 or higher, putting it on par with other versions of the game. Terraria is already available on both the Nintendo 3DS and Wii U.

Terraria may be several years old but that doesn’t stop the game from being any less popular. On any given day the title is average several thousand players on Steam and we suspect the number is just as high on the console counterparts.

Terraria for Switch will launch later this year but there isn't an exact date yet. It will be 1.3 or higher :)

Terraria isn’t the only game Switch owners are waiting patiently for. Stardew Valley is another big game that has been announced for the Switch but we’re still awaiting its release on the console. The game originally set for release this summer but has since dropped the summer 2017 release date in favor of a more broad 2017 release date. 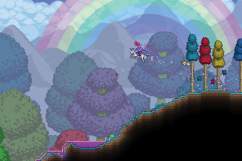 Read More
Nintendo Switch, Terraria
Here's when to expect Terraria on the Switch.