It’s a brutal day for The International 2017. With no upper bracket matches, day four marked the beginning of the final stretch, composed entirely of elimination matches. By the time the casters were removing their headsets of the day, three teams had been sent home.

This was quite of a textbook game of Dota 2, even in the drafting phase. While the majority of teams throughout the event drafted their picks with a particular game plan in mind, Team Empire and Team Liquid both appeared to be making response picks and preemptive bans. This trend continued on into game one, in a sense, with the majority of the plays made in the laning phase being reactionary.

Matumbaman’s Broodmother made for a particularly promising pick, as that by-the-book style of play led to Team Liquid grabbing the Aegis at 14 minutes, mostly thanks to Broodmother’s spiderlings joining him in the Pit. It stood as testament to how Team Liquid skillfully played the map, even if Team Empire did give them one hell of a struggle.

Game two showed something of a similar pattern to game one, where Team Empire had something of a superficial lead that was inevitably snatched from the palms of their hands by Team Liquid; then, the game continued to spiral out of control for Empire until the game was over. Although the game’s pace wasn’t as swift as before, mostly due to Team Empire being more wary of Team Liquid’s actions (and due to a more thought-out draft), the overall game progression felt similar to game one.

Game one started out with LGD claiming one kill per minute for the first six minutes, so it’s easy to say that two of TI7’s most aggressive teams put on a riveting game. Of course, OG claimed some kills of their own, frequently evening out the game in terms of experience and net worth, but their draft forced them to play slower than normal; they could do little more than passively allow LGD to control the pace of the early game. While OG was able to knock LGD back on their heels on several occasions, coming dangerously close to taking control of the game at many points, they were never quite able to push LGD off of their feet entirely. After an unbelievably intense ending, LGD was able to take game one.

With a significantly faster draft this time around, OG went into game two with their usual early game pace. LGD’s excellent farming made it nearly impossible for OG’s gold advantage to break 2k, despite OG having 11 of the total 18 kills by 15 minutes, but OG was steadily working to pressure LGD into a defensive position. It was a critical team fight at 20 minutes that finally turned the tables in LGD’s favor, when LGD gained the momentum they needed to start pushing back into their Dire territory. By 25 minutes, they had a five kill and 6k gold lead, and the game only continued to spiral out of OG’s control as they fell to pieces.

In a single word, I would describe the drafting phase as “Awkward.” Virtus.pro selected a very strange, very unsteady draft while Team Liquid chose a push-heavy lineup. If Virtus.pro had any chance of making that kind of draft work, they were going to have to go all-in and lay on the pressure before Liquid so much as had a chance to blink.

Virtus.pro… Did not do that. They were aggressive, but mostly in the sense that they were matching the pace that Liquid set, until that pace became too much and they were forced to play defense for an uncomfortable amount of time. Despite all of this, they still managed to force a comeback after Team Liquid attempted to take a tier three tower, and they charged forward to apply the kind of pressure that fans are accustomed to seeing.

The comeback didn’t last long, and the two teams shoved each other around the map until Virtus.pro finally managed to push into Team Liquid’s base at 55 minutes to destroy the middle barracks and forcing two of Liquid’s members to use their buybacks to prevent them from taking the top racks. They were forced to use their own buybacks at 58 minutes when Team Liquid swooped in to steal the Roshan kill and the Aegis Cheese, and all 10 players were forced to wait for their buybacks to cool down at the 60 minute mark. Still, Team Liquid rushed down mid to destroy the bottom barracks and tier three tower without any losses.

To put it simply, no matter how many times it looked like one team had an almost overwhelming advantage, the game swung back and forth too much for anyone to predict how it would end. It was literally anyone’s game, for over an hour, until a dramatic, mind-blowing end to game one had Team Liquid taking the win at 105 minutes.

First blood was spilled by Team Liquid in a double kill before the first 20 seconds of game two, and we knew we were going to be in for a wild ride (as if game one wasn’t insane enough). Or, well, we hoped. The early game moved very, very, very slowly. Team Liquid was able to secure five kills rather easily, but Virtus.pro didn’t get their first kill around the 15 minute mark – and not due to any spectacular farming that would give them an edge over their opponent. Whatever energy that spiked itself into the final minutes of game one was no longer present in the first half of the game. It wasn’t until the second half that things finally picked up, because Virtus.pro refused to go down without a fight. VP didn’t have the same cushion as Team Liquid, and teetering on the edge of elimination was bringing out that familiar aggression. 35 minutes in, Virtus.pro had destroyed one and a half of Team Liquid’s barracks, had 15 kills under their belts, and boasted a 16k gold lead before winning a team fight that took out three of Team Liquid’s members, and killing Roshan for the Aegis.

They worked their draft perfectly. That’s it. They used their draft to the extent of its ability, worked together like a well-oiled machine, and used Team Liquid’s exhaustion from game one against them until they tied out the series 1-1.

This time, it was Virtus.pro to get the first kill and the first three bounty runes in the first minute. Team Liquid wasn’t far behind, reaping the rewards of well-planned kills and keeping the early game stable. They soon found themselves falling behind in terms of kills and experience but, in terms of gold, Virtus.pro’s lead was only marginal at best. Just as they started to pull ahead, Team Liquid stepped up to the plate . Virtus.pro was thrown on the defensive, seeming almost frazzled. Their synergy started to crumble about halfway through the game, whereas Liquid approached their team fights and base pushes with carefully planned strikes. From then on, Virtus.pro didn’t stand a chance. It was only a matter of time before their Ancient crumbled, eliminating them from TI7. 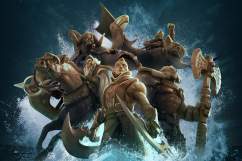