I was impressed by Good Game’s first two episodes as it took the average Sports storyline and adapted it to eSports to both criticize and celebrate the immensely popular pastime. I was so impressed that I checked out the show’s third episode which released today.

This episode primarily focused on Sam (Jade Payton), who after having her Olympic Tennis dreams dashed fully commits to the eSports team. Alex (Dan Avidan), fearing that she’s getting bored of eSports, takes advantage of Sam’s competitive spirit and drives her to commit way too fully to the team. While it wasn’t as big of a turning point for the team as the events of episode two, Sam’s eventual crash did bring the team together once more with Alex learning to be more rewarding as a coach and Sam learning to dial it back and that failure doesn’t define you. It’s not only a good message but another great commentary on the trend of bingeing while playing games.

We also learn that Steamin’ Semen (Oliver Cooper), Ryland’s rival, is behind the embarrassing viral video that cost Ryland (Arin Hanson) his DOTA career. Unfortunately nothing came of this particular plot point in this episode and it was cut off after it was just boiling over. It was mostly an excuse to make some lukewarm jokes and reestablish Steamin’ as the unlikable villain of this series with traits we already knew about him.

In fact, the whole episode was lacking in the comedy department. While it wasn’t insufferable, the writing just felt it was coasting throughout the episode. Either it was predictable or it wasn’t that funny to begin with. I didn’t chuckle or grin nearly as much as I did in the first two episodes.

The thing that really got me interested in this episode was the end credits scene with Jesse (Jesse Cox), the creator of the show’s central game Killcore. We can see that the game’s monstrous success is causing a great deal of stress on him, with him saying that maybe there shouldn’t even be a Killcore. These end credit sequences are slowly and slowly building up and I can’t wait to see what happens next.

While I enjoyed the message of this episode as well as the arc of Sam as a character, I can’t help but feel that the episode as a whole was just treading water both in the writing and in the comedy. Hopefully the series can only go up from here, especially since we’re at the halfway point now. 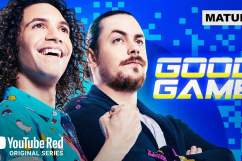 Good Game by Game Grumps Impressions: How Is the Show?