Monster Hunter: World was announced during E3 2017 but outside of a couple trailers, we haven’t really gotten a lot of details about the upcoming title. Today, Capcom opened the flood gates regarding the official release date and some pre-order bonuses.

Although we are still waiting on a PC release date, the Xbox One and PS4 versions of the game will be seeing a global release on January 26, 2018. Pre-orders for the game begin today and bonus incentives are available for the standard edition as well as the Digital Deluxe and physical Collector’s editions. The prices for these special editions aren’t too outrageous so they should have some strong appeal to Monster Hunter fans.

The Digital Deluxe Edition in North America will cost $69.99 and include the digital game, a Samurai Set skin, three gestures, two sticker sets  and an extra face paint and hair style for the hunter. If you’re on the PS4, you’ll be getting all that plus a couple extra things. PS4 players who get the Digital Deluxe Edition will get all the previously mentioned items plus 14 weapon-themed PSN avatars. Any PS4 player who pre-orders any version of the game will also receive instant access to a custom PS4 theme.

If you’re more of a physical collector, Capcom has you covered with the physical Collector’s Edition. This collection includes a physical copy of the game, voucher for the additional customizable options from the Digital Deluxe Edition (the Samurai Set skin, three gestures, two sticker sets and the face paint and hair style for the hunter), a 32 page hardcover art book, a digital soundtrack code and a monster statue all bundled in a custom collector’s box. This bundle will retail for $149.99.

If you’re just looking forward to the game itself, you can also opt to just pre-order the standard edition and still receive some bonus items. Those who pre-order the game on Xbox One or PS4 either digitally or at participating retailers will receive the Origin Set Armor and the Fair Wind Charm talisman. The talisman gives players improved starting defense and offense state boosts as well as a useful gathering skill. These two items may become available for those who don’t pre-order at a later date in-game.

To coincide with all this news, Capcom has released a brand new trailer for the title from the Tokyo Game Show. The trailer, which you can find embedded in this post, shows off some of the voice acting, characters and environments you’ll be traversing in Monster Hunter: World.

As a result, this is one of the first Monster Hunter titles to skip a Nintendo console in quite some time. With the release of Monster Hunter: Double Cross on the Switch, many thought it was a foregone conclusion to bring this title to the Switch, but that just wasn’t the case here. 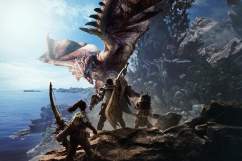