Assassin’s Creed Origins’ combat system has seen quite a step up from previous iterations, taking a bit more inspiration from The Legend of Zelda or even Dark Souls with its lock on system and dodging. That being said, it can be a bit tricky since most of the time the deck is stacked against you with tough opponents and swarms of enemies.

Here’s 10 tips and tricks to get you through combat.

1. Be Wary of Enemy Attack Animations

Enemies have very distinct attack animations, letting you know when and where to dodge. Try dodging or parrying an attack right before the enemy hits you for the best results.

If an enemy’s weapon glows, that means they’re about to unleash a powerful, shield-breaking attack. Be sure to dodge these especially.

You can dodge three times before a cooldown activates.

3. Parrying Attacks Gives You an Adventage

Parrying the attacks of your opponents is also a great way to stun them. After unlocking the ability in the skill tree, press the designated button while in combat as the enemy attacks you to stop them from attacking and stun them. The timing is pretty tricky as there’s a slight delay before you actually parry, so try practicing on weak opponents.

Some shields have abilities that grant health whenever you parry, making effective parrying a must.

4. Upgrade Gear Whenever You Can

Blacksmiths in towns allow you to upgrade your weaponry in addition to buying new weapons. This means that if you have a weapon, bow, or shield with a great ability, you can upgrade the weapon so you can continue to use it so it doesn’t get outclassed by the other gear you find.

You not only have to upgrade your weaponry but your armor as well. That way you can increase your health, damage output, and how much ammo you can carry.

Upgrading weapons costs money while upgrading armor costs resources. Both can be found by ambushing travelling convoys. Have your falcon Senu find convoys for you. They’ll most likely be on horseback so hop on your mount and attack them with a spear or staff.

5. Try Not to Attack Opponents Stronger Than You

Enemies even a few levels above you can take you down easily, especially if they’re in groups. Be sure you’re at the proper level before taking on a mission.

Completing the many side quests littered about the world is by far the fastest was to get XP and level up as you’ll often gain XP through killing opponents and finding treasure as you complete the mission on top of the massive XP reward you get at the end.

6. Status Effects Are Your Best Friend

Status Effects, namely poison and burning which deal damage over time, can help you take on even opponents much stronger than you.

The easiest way to inflict status effects is to get a legendary weapon that has a chance to poison, burn, or wound the opponent with every hit. This ability is especially effective on weapons that deal multiple hits quickly like Dual Swords. You can also obtain Poison Darts and Fire Bombs by unlocking them in the Seer skill tree to inflict poison.

7. Bows Are Great for Combat

Bows aren’t just great for stealth. They can also be deployed while in combat. Light and Warrior Bows are especially useful. Light Bows shoot arrows rapidly while Warrior Bows can attack groups with its shotgun-like spread.

8. You Can Light Your Arrows On Fire

Arrows deal extra damage and burn opponents if you light them on fire first. This can be done by touching an arrow at any fire source while charging a shot. You can also pull out your equipped torch (hold D-pad right), drop it, and light your arrow that way.

Your health is directly tied to your shield. The stronger your shield, the more health you have. So be sure to upgrade it or find a stronger replacement whenever you can.

You can unlock an ability that allows Senu to harass enemies while scouting, stunning them briefly. Activating this skill automatically brings control back to you so be sure you’re close to an opponent in order to actually take advantage of the stun.

Senu will also automatically harass any enemies you’re in combat with when this skill is unlocked. 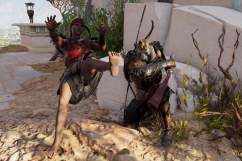 Assassin’s Creed Origins: How to Get the Hidden Blade