Fire Emblem Warriors is the latest Dynasty Warriors-inspired Nintendo spin-off. The game takes on the tried and true Dynasty Warriors hack-and-slash gameplay and infuses some Fire Emblem action into the mix. The result is a surprisingly solid foundation that will help you find hours of enjoyment as you slash through hordes of enemies with your Fire Emblem characters.

To play multiplayer on Fire Emblem Warriors for the Switch you’ll have to progress through the story by yourself initially. Once you get past Chapter 1, you should have the option to have a second player join you on the battlefield through the Map Preparation screen. You have the options to use single Joy-Cons or hooking up a Pro Controller for multiplayer. When the option to play multiplayer appears, you’ll see an option for player two to join in the top-right corner.

Unfortunately we don’t have the two screen experience we had with Hyrule Warriors on the Wii U. The multiplayer will work in both docked and handheld modes. It looks like multiplayer is only available through one Switch so you don’t have to worry about having to find another Switch to play local multiplayer with someone else.

Fire Emblem Warriors is out now exclusive on the Nintendo Switch and New Nintendo 3DS. 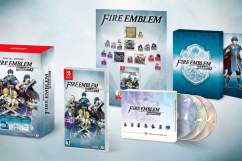