The Guardians of the Galaxy are seemingly coming apart at the seams. The last three episodes from their Telltale Games series has seen them debate over how to deal with the death of their biggest foe and the best way to handle a powerful artifact. Depending on the choices you made during Episode 3, that artifact and your treatment of it impacts the opening moments of this new emotional roller coaster. Episode 4 hits the hardest and truly leaves you in shock over the status of the galaxy’s ragtag saviors.

This episode’s early portions carry on the action-packed battle that erupted during the closing moments of Episode 3. The main antagonist and her followers have even more of a reason to wipe Peter and his allies out, which leads to an exciting introduction. And just like before, the choice of music used during one of the intro’s scenes perfectly encapsulates the feeling of what’s occurring onscreen. After recovering from their current “underground” predicament, the Guardians come into contact with a cute new pet. Problem is, that lil’ guys’ buddies are from cuddly. Soon after, you’ll be thrown into more harrowing circumstances that keep the Guardians on edge and this episode full of crazy set pieces. One of the set pieces I’m alluding to is Drax’s flashback sequence, an eye opening scene that shows him in a more compassionate light. Watching Drax interact with a young loved one as he trains her for a future trial provides one of the better character focused moments thus far. 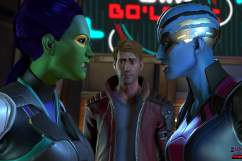 ‘Marvel’s Guardians of the Galaxy: The Telltale Series’ – Episode 3 Review

The Guardians’ predicament goes from bad to worse during the middle portion of this episode. A giant rock worm swallows them and their spaceship whole. This is where the action slows to a crawl and you’re forced to go hunting for ship repair items as Peter. After playing through all the madness from before, this slower paced section is an abrupt change of pace. Puttering around with broken rocket boots on while solving simple obstacle puzzles is kind of a bore. But when it’s time to make your grand escape, the best parts of this episode truly kick in. The mix of a hyperactive oldies rock tune, an extremely hype getaway sequence and a decision that may lead to the loss of a team member are exhilarating moments. By the end of this episode’s journey, you’ll either let out a sigh of relief or a sigh of disappointment. Episode four undoubtably leaves players biting their nails in anticipation for the series finale.

The crescendo of the first three episodes has led right into an episode that’s so good, it could have been the finale. There’s even more classic songs, heart tugging moments, hilarious quips and climactic action skirmishes. Even though the middle portion of this episode is incredibly dull, all the madness that occurs afterwards makes up for it. Episode four is exciting by itself, but it offers tons of closure for past story threads. After it ends, I’m sure many fans (including me) can’t wait to see how the Guardians get back together and take out their biggest obstacle. 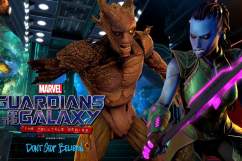 Marvel’s Guardians of the Galaxy: The Telltale Series – Episode 5 Review