So its all lead up to this. Peter Quill, Gamora, Drax, Groot and Rocket Raccoon braved the dangers of the universe, but were unable to keep their family as tight as it once was. The final episode of Telltale Games’ first season of the Guardians of the Galaxy delivers a triumphant tale of redemption, reconciliation and triumph. As soon as this episode begins, the focus centers right on mending broken relationships and figuring out who you should reach out to first. This trippy sequence is a unique section that gives you more insight into your relationship with Peter’s teammates. Listening to the inner thoughts of each Guardian is enlightening and offers one of the better slower-paced moments from this first season.

One of the main themes of this narrative-driven Guardians adventure is reliving memories. This time, getting the opportunity to hop into Groot’s favorite memory means you’ll enter one of the more humorous flashback sequences. Witnessing the formation of Peter Quill’s dream team (and laying eyes on his Joey Ryan styled mustache) is one of the more standout scenes from this episode. After this moment concludes, the aforementioned section of the game that lets you collect each team member’s thoughts occurs and leads right into physically putting the band back together. Wherever you decide to go and whoever you decide to reach out to means you’ll get the chance to grow even closer with someone who either left the team or someone who was once thought to be dead. This section of the episode is heartwarming and reveals a whole lot more about the characters you’ve been fighting alongside for four episodes thus far. 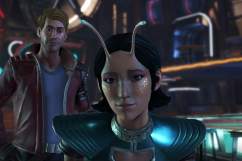 Marvel’s Guardians of the Galaxy: The Telltale Series – Episode 4 Review

The grand finale that erupts after you designate each Guardians’ main role for a grand plan is amazing. You’re once again forced to make some important decisions that determine how flawless or flawed your plan ends up being. For those who saw the first film, this sequence definitely features some comparisons to how the Guardians vanquished Ronan. The best parts of this series are included during this action-packed sequence – hilarious quips from each character, laser gun blasting, intense Quick-Time Events and a catchy tune to go along with all of it.

Some of the abrupt loading that pops up in between those action-packed scenes are annoying, of course. They may be a noticeable nuisance, but they don’t last long enough to put a damper on this episode’s impactful final moments. After the main antagonist is finally done away with, you get the chance to either revisit a loved one or choose to move on without acknowledging the past. I for one have already made the decision to hop into the unknown future of Telltale’s rendition of the Guardians of the Galaxy.

Don’t Stop Believin’ is a quality finale. It wraps up several story threads, gets the team back together during some emotional conversational moments and delivers on its promise of explosive galaxy saving. Groot’s flashback sequence, Starlord’s trip into his mates’ psyche and the climactic outro provide a bevy of strong moments. The loading in between some of the game’s more action-packed moments are annoying, sure. But they aren’t that much of an issue. Episode 5 of Telltale’s Guardians of the Galaxy has me anticipating more space-faring adventures with Peter Quill and his family of heroes.