Unlike a lot of multiplayer focused games, users in Star Wars Battlefront 2 can actually change what perspective they want to play in. There are various pros and cons to playing from either third or first person, so it’s important you know when to actually swap. To actually change between these viewpoints simply hold down on the D-pad until it changes. This will take a second or two, so make sure to swap behind cover or right when you spawn to avoid getting killed.

When it third person, players will have a better view of their surroundings and can actually peak around corners. This allows for a more tactical approach and can be extremely useful for when you need to defend specific objectives. Instead of risking being shot, third person users can simply wait around corners for a big push before engaging. However, the catch is that it can a bit harder to accurately aim from this perspective. While nothing mechanically actually changes between these viewpoints, third person is clearly designed for more close quarters style engagements. 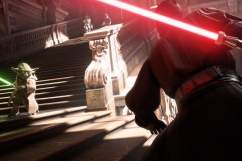 Star Wars Battlefront 2 Beta: How to Play as a Hero

For those in first person, you will find aiming at longer distances far easier with all of the different classes. This can be extremely useful for the open streets of Theed, which has a lot of sightlines that clever snipers can abuse. Remember, there’s no penalty for switching between viewpoints so feel free to swap between them. Typically we like to use first person during the outside portion of Theed and then swap to third once we move indoors.

If you are looking to take to the skies, it’s almost always beneficial to just fly in third person over first. Situational awareness is key for anyone wanting to excel as a pilot, so being able to see where laser fire is coming from is important. Plus, being in third person will lessen your chances of making a wrong turn and slamming into the side of a Star Destroyer.

Ultimately, there is no true downside to playing with either so experiment with both to see which feels right to you. Even though they each have their drawbacks, Star Wars Battlefront 2 does a job of not punishing users for playing how they want. 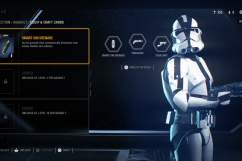 Star Wars Battlefront 2 Beta: How to Get Loot Crates