Star Wars Battlefront 2 has officially released and it’s aiming to plunge players into the iconic battles of the film franchise. While a lot of the fighting will be on the ground, there is a mode for those who are looking to the stars. Dubbed Starfighter Assault, players will be taking control of various spaceships to duke it out over defending or attacking various objectives. Given almost every match devolves into a chaotic symphony of laser blast and explosions it’s easy to get lost in the chaos.

Here are 5 tips and tricks to help you gain an edge in Star Wars Battlefront 2‘s Starfighter Assault mode.

1. Learn to Shake Off Foes

An obvious, but very important lesson you’ll want to learn is how to win a 1v1 dogfight with an opponent. Typically some most deaths come from getting jumped or picked off from a distance, but there are instances where you’ll need to outrun your foe. When being chased make sure to use your defensive weapons at the right time. Don’t just panic activate this ability otherwise your window of opportunity to escape or counterattack will be lost.

For the boosters try to hit them right as you make a tricky turn or break line of sight. You want your foe to lose their tracking on, so you can effectively vanish into the crowd of other starfighters. Boosters are also great for dodging missiles or quickly passing performing a loop to get behind someone.

The Ion Missiles are quite potent as they basically disable an entire ship. To catch your foe off guard, activate the missiles, slam on the brakes, and then either dive up or down. The missiles auto lock on foes closest to your ship. This ensures that they not only hit but hit the person firing at you. Finally, make sure to use your Electronic Countermeasures right when the missiles lock and then try to break line of sight so you can escape. If you are chasing someone and then find yourself getting tailed stop hunting down your target. Your priority should always be to shake those trying to kill you first when it comes to dogfighting. 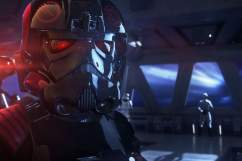 Star Wars Battlefront 2: How to Unlock Every Multiplayer Hero

One mistake that a lot of new pilots make is ignoring the main objectives in favor of hunting down other players. Remember, there is no Deathmatch game mode for Starfighter Assault so always focus on protecting or attacking the targets that are marked. This will earn users points and help rank up whatever specific ship is being used. Additionally, playing the objective is one of the best ways to earn Hero starfighters in the game thanks to the increased points.

For defenders, try to focus on destroying the marked targets like the Y-Wings as these will typically do a lot of damage to a frigate. Attackers should always act as escorts for these ships since they are pretty much helpless on their own. Target any Interceptor class vehicles first since they’ll have the best chance of shooting the bombers down. For static defenses, save missiles for these targets to pour on extra damage during brief windows of attack.

Another mistake that keeps appearing is not knowing when or what type of Starfighters to pick.. Achieving a good balance among your team is critical to success, especially if you’re on the attack. Try to never have too many of one ship type at any time, as this will vastly limit your attack and counterattack options. Here’s a quick breakdown of each spaceship and what to use them for:

Despite being immersive, we highly recommend that you fly your spacecraft in third person. One of the most important aspects of being a successful pilot is situational awareness, Understanding where enemy fighters and from where they are firing at you is incredibly important. Playing in first person can heavily limit the amount of information you can gather. It also makes flying far more difficult since you can turn your head in the cockpit to see if you’re about to turn into an asteroid. Switching to third person eliminates both of these issues and allows for a more consistent experience in dogfights.

Perhaps the most controversial aspect of Star Wars Battlefront 2, the Star Card system allows players to obtain incremental advantages for their ship of choice. When picking your Star Cards make sure they add benefits that strengthen a fighter’s specific skill set. For the Bomber, both the Advanced Torpedoes and Defensive Upgrade can make this ship far harder to bring down. Interceptor users should focus on maneuverability and damage, so consider running the Offensive Upgrade.

As for Fighters, these have a bit more freedom given their balance of offense and defense. If you are defending consider a more aggressive weapon’s package since you’ll need to quickly shoot down Bombers or enemy frigates. Always ensure that your Star Cards benefit both your ship’s strengths and your personal playstyle.