Studio Ghibli is known for crafting some of the finest works in Japanese animation.

Spirited Away, My Neighbor Totoro and Princess Mononoke are just a few of the classic films they’ve produced. Back in 2011, they released a whimsical action RPG alongside video game development studio Level- 5 called Ni no Kuni: Wrath of the White Witch. The game garnered high praise for its amazing visuals, heart wrenching story, memorable soundtrack and fun battle system. It may have taken a while, but the sequel to that game is finally arriving on March 23, 2018. With it comes the same admirable attributes that its predecessor featured, plus a few enhancements that will improve upon its formula.

This guide is set to give you a primer on one of the earliest big games to land in 2018, Ni no Kuni II: Revenant Kingdom.

1. Studio Ghibli Isn’t Involved This Time, But It Still Features Their Art Style and Charm

While Studio Ghibli isn’t involved with the development of Ni no Kuni II, one of the studio’s former character designers is working with Level-5 for this sequel. That individual is Yoshiyuki Momose, who happens to have his own animation studio (Studio Kajino) that works on projects for Studio Ghibli. Legendary Japanese composer and musical director Joe Hisaishi (who worked on the first game) will be handling the soundtrack for Ni no Kuni II. Yoshiyuki also helped produce the first game as well. Even though Studio Ghibli doesn’t have its hands in this project, it’s clear that the game still pays homage to the studio’s animation style, storyline themes and sweeping musical scores.

2. The Story Revolves Around a Young King Who Fights to Reclaim His Kingdom

This sequel’s plot takes place hundreds of years after the events of Wrath of the White Witch. The plot focuses on a young boy named Evan Pettiwhisker Tildrum, who rules over the cat tribe and its homeland as king. The cat tribe is constantly at odds with the mouse tribe, who both reside in the town of Ding Dong Dell. The mouse tribe eventually enacts a coup d’état, which leads to Evan losing his throne and ownership over his former castle/kingdom. In order to reclaim his kingdom, Evan sets out on a journey with two allies – Roland, a young man who resides from another world and Tani, the daughter of an infamous boss of air pirates.

3. Players Can Freely Explore the Game’s Open World, Quickly Access Locations on the World Map and Manage Their Own Kingdom

Your grand adventure will place Evan and his two friends in a variety of locales. The World Map lets you quickly select a location and once chosen, your party will get transformed into chibi-like characters as they roam the vast overworld. While running through the overworld, you’ll discover various villages, dungeons, treasure and also encounter dangerous enemies.

The five kingdoms that you’ll journey through reside either on land, air or sea. Along the course of the game, you’ll be able to construct and manage your very own kingdom. Doing so entails convincing other people to join your kingdom, recruiting royal advisors to help run it and making several decisions that’ll impact its overall growth.

4. The Battle System Should be Familiar to Fans of Actions RPG’s; The Newest Element Added to Battle is the Presence of “Higgledies”

When it comes time to hop into battle, Ni no Kuni II throws Evan and his two allies onto an open battlefield. You’ll be able to switch between all three characters as you actively move around and utilize melee attacks and special abilities. One of the more important elements being added to the battle system is the presence of Higgledies. These multi-colored spirits represent a specific type of element and work alongside Evan in battle.

For example, the White Higgledies increase your attack power while the Green Higgledies strengthen your defense. The Higgledies are also capable of landing attacks on your foes, healing your party and performing other types of actions. You’ll also need to keep an eye out for Higgledie Leaders, who’re capable of grouping together several Higgledies to activate more powerful abilities.

Pre-ordering either the Standard, Premium or Collector’s Edition of Ni no Kuni II will get you access to the “Special Sword Set.” This DLC bonus comes with the following weapons – the Jade Katana, Siren’s Sabre, Cloudcutter, The Bleeding Edge and Greenling Glaive. The special bonuses that come with the Premium Edition includes the Dragon’s Tooth Weapon DLC, Premium Edition packaging, a Steelbook case, a 3D Papercraft Kit and the game’s physical soundtrack.

And finally, the Collector’s Edition comes with everything included in the Premium Edition and these additional goodies: 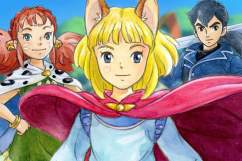