Throughout the various stages found in each world, you’ll have the option to obtain four clovers from each one. Only one clover is needed to finish the stage and that’s the one you get at the very end. The other three clovers are obtained by finding 300 coins, solving a puzzle and by finding the letters to spell out LUCKY.

These clovers won’t be all that hard to find if you actively seek them out. The coins will probably be the easiest to miss but weirdly enough, probably the easiest to get. During my playthrough I found myself going back to get the coins more often than I was for any other of the clovers.

In order to get 300 coins, make sure you collect every diamond and big coin you find. Diamonds will give you a large influx of coins so if you collect all of those, you’re fast on your way to 300. It also helps to kill every enemy since they will also drop some coins for you. Collecting all of the letters is also a good way to boost your coin count. You will still earn coins even if this is your second run through the level and you have already collected the letters.

The letters aren’t too difficult to find either. As you progress through the level, you’ll come across them in order. That means if you end up finding the K before you find the C, that means you need to backtrack because you skipped over a letter.

Finding the fox holes to go down or the special puzzles might be a little trickier to find and they require some thinking on your feet. Some of these hidden clovers require you to flick a certain number of levers or kill a certain number of enemies. It might take some playing around thing but none of these are too terribly hard to find.

None of the stages in the game are very long so if you do miss out on some clovers, it’s usually no big deal if you have to go back. You can tell you missed clovers by looking at the display of clovers outside of every stage and seeing what ones aren’t lit up.

This is certainly a game where you’ll want to explore every nook and cranny. It also helps that the environments are so bright and colorful, it’s like they encourage you to explore everywhere.

Super Lucky’s Tale is an Xbox One console exclusive but also released on Windows 10. The game itself is an Xbox Play Anywhere title meaning a digital copy on Xbox One will get you a copy for Windows 10 and vice-versa.

If you liked this then you should make sure to check out the rest of Heavy’s gaming coverage. 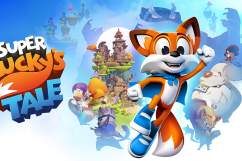 Read More
PC Games, Super Lucky's Tale, Xbox One
Here is what you have to do to earn four clovers on each level.