The nominees are here for The Game Awards 2017 and the time is not for being salty over certain games not getting recognized and pretending we don’t care. So let’s do that her and look at five games that should have been nominated.

Note: The opinions expressed in the article are that of the author and not Heavy as a whole.

Nioh for Game of the Year

Nioh was one of the best games of this year. While it wears it’s Dark Souls influence on its sleeve, the changes it makes to the formula really make it its own game. The combat system is fast, fluid, and brutal while still retaining the methodical tactics of Dark Souls. The loot system makes every mission and enemy encounter rewarding, and you can spend hours honing your gear. But what really makes the game stand out is it’s beautiful level design, with areas twisting and turning while still being easily navigated with checkpoints and shortcuts in just the right places. The story is also great. While Dark Souls is more vague with it’s storytelling, Nioh puts you right in the middle of Japan’s Sengoku period with actual historical figures to boot. It absolutely deserves to be ranked right up there with the likes of Breath of the Wild and Super Mario Odyssey.

Side note: Do we really need PlayerUnknown’s Battlegrounds nominated for Game of the Year? Sure it’s a great game and a highly successful one at that but it’s not even out of early access yet.

Any of the Switch Games for Best Handheld Game

I know that the Nintendo Switch is technically a console and not a handheld, but it works wonders no matter how you play it. In fact, I actually prefer to play Switch games in handheld mode due to the pick-up-and-play nature of most Switch games and the fact that I can actually lay down in my couch.

The listing right now for Best Handheld Game may as well be renamed to Best 3DS Game because that’s all the games on that list. And while those games absolutely deserve to be there, we need to add some more games to it.

Any Switch games would be welcome on the list, but if I had to choose one, it would be Super Mario Odyssey. While the motion controls are harder to pull off in handheld mode, the snappy load times and gameplay ensure that you can play it anywhere for however long you want.

Best Mobile Game is a great nomination for Fire Emblem Heroes, but the game is so rewarding that it deserves a nomination for Best Ongoing Game. Not only do the matches never get old, but the game has been constantly updating with new maps, characters, and even game modes ever since its release in February, and it doesn’t look like it’s stopping anytime soon. It also has a pretty good business model for mobile games; it doesn’t have ads, they give out the premium currency regularly, and while many characters you acquire randomly are better than others no hero feels like they’re completely useless. It’s also a fantastic game in it’s own right, which helps it feel so rewarding. The game takes the same classic tactics gameplay of the Fire Emblem games you know and love and streamlines them for mobile phones. In doing so, it takes out the luck-based frustration of the more recent games and makes the game snappier and more fun as a result.

Sonic Mania was snubbed at The Game Awards. It’s fast-paced gameplay with light puzzle platforming across multiple world would have made it perfect for Best Action/Adventure Game. It’s eye-popping aesthetic and fluid animations are jaw-dropping, making it perfect for Best Art Direction. And you know what? Overall the game would have been perfect for Game of the Year. The love behind the revamping of classic Sonic gameplay is palpable and it really shows throughout each level. Best Family Game is okay I guess, but the game deserves a lot more love than that.

A Hat in Time for Best Independent Game

While A Hat in Time will forever be out shadowed by Super Mario Odyssey this year, it still has a place as one of the best 3D platformers out there and one of the best independent efforts of this year. Here’s a quote from our review:

A Hat in Time is more than a Super Mario 64 clone. Its witty humor, breathtaking visuals, clever platforming challenges, and constant surprises puts even the best 3D platformers to shame. In fact, it has quickly become one of my favorite 3D platformers of all time, and I do not say that lightly.

What games did you wish were nominated for an award for this year’s The Game Awards? Let us know in the comment section below. 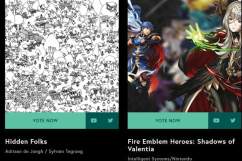 (Update) The Game Awards 2017 Nominees List Has a Mistake

Read More
Games
The Game Awards 2017 Nominees List is here. Let's look at five games that should have been nominated for awards.