The late 2016 release of Dead Rising 4 for the Xbox One came and went without much fervor. While some enjoyed its lack of a strict time limit and use of Exo Suit’s, others lamented its unsatisfying plot and uninteresting open world. Now that the zombie basher has finally made its way over to the PS4, its content value and overall quality has gotten a noticeable bump. Frank’s Big Package can be labeled as the definitive version of Dead Rising 4 due to several factors – the addition of a whacky cosplay-focused mode, all of the previously released DLC and several fan-requested improvements.

While the core campaign of Dead Rising 4 remains intact, a couple of new wrinkles upgrades its gameplay loop. New distress call missions give you a chance to gain even more experience by helping out random survivors. These new objectives break up the action of your main mission a bit and offer you something else to to do besides beheading the undead. Longtime fans requested the addition of more meaningful Maniac encounters, which has actually been implemented here. The presence of side missions that allow you to engage in an arena battle with a murderous Santa Claus or go head-to-head with a crazed pirate is awesome. Along with all of the DLC released post-launch for the game in 2016, this definitive edition and its noted improvements truly feels like a “big package.”

If you’ve already made your way through the main campaign, then Capcom Heroes will give you a good reason to complete it once more. Frank has always been known to don a bevy of hilarious getup’s. This mode goes even deeper into the series’ “WTF?” category with its unlockable costumes. Special arcade cabinets are placed around Willamette, Colorado. By dropping a coin into them, Frank will adopt the physical likeness and special abilities of Capcom’s greatest characters. This remix of the main campaign becomes tons more fun due to the hilarity of donning a Viewtiful Joe outfit. There’s a whole bunch of other costumes to unlock, plus special missions that give you new moves and a darker version of those cosplay duds. Capcom Heroes is an extra treat for those returning to the game, while first-timers will get even more of a kick out of it. The use of Exo Suits and customizable weapons is excluded from this mode to balance things out. Thankfully, you can go back to the traditional way of playing the main campaign if you so choose.

It’s cool that the improvements fans requested (loudly!) made their way into the game. Well, most of them. Those same fans wanted the option to complete the story mode with a cop-op buddy. That feature still hasn’t been implemented, however. You’ll still have to get your online multiplayer thrills from the uninventive formula change offered here. Playing as a random survivor and attempting to kill more zombies than your online rivals gets old rather quickly. The other playable option that lets you compete against other players is the mini-golf mode (which is hilariously named, by the way). What’s disappointing is the fact that it doesn’t elicit the same enjoyment you’d get from something like Hot Shots Golf or Mario Golf. Chances are you’ll play it once to see what it’s all about, then totally ignore it while you enjoy the game’s more worthwhile diversions.

Frank’s Big Package updates Dead Rising 4 to the point where its naysayers may be forced to give it another chance. Capcom Heroes’ implementation of character costumes with newfound powers makes the main campaign all the more rambunctious. All of the DLC comes packaged with this definitive edition, which makes Dead Rising 4 worth returning to or experiencing for the very first time. The multiplayer and mini-golf modes are blemishes on this package, however. Take my advice by ignoring the both of them and enjoying everything else Frank’s Big Package has to offer. 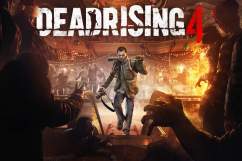