Destiny 2’s first expansion has released and it’s full of new content and loot for players to obtain. Dubbed “Curse of Osiris,” users will need to venture off to Mercury in order to save this iconic Guardian from the Vex.  Just like every planet in Destiny 2, Mercury has its own Public Event – called Vex Crossroads – that can be finished and even modified to a Heroic difficulty. While there are a lot of steps to finishing this Public Event, triggering the actual Heroic modifier is fairly certain once you know what to look for.

When the Public Event starts go about it as you would normally and take care of the various Vex that spawn. Once they are all dead, kill the more powerful Vex majors that arrive and then grab one of the two arc charges they drop. Slam them into the white energy towers to the right and left of the large circular structure by the jump pad. Repeat this process on both sides until all four of the charges have been planted. This will cause the jump pad on the right to turn and face one of the metal islands floating in the sky. Land here, quickly kill all of the Vex and then slam the arc charge into the center conduit.

Now, turn around and shoot the floating Vex diamond that will spawn in the sky behind the island. Destroying it will spawn two platforms that you can jump on. Quickly maneuver up these and destroy the next set of crystals that spawn in the air. This will trigger more platforms and let you climb to the roof of the island. There will be a single Vex plate which requires the player to stand on and slowly raise the energy up until its completely solid. Once this is done, jump down and take the jump pad to the center. Move to the other island, quickly kill the Vex once again, and then slam the charge in the center.

You won’t need to shoot another set of diamonds, just make sure to finish this section before the timer expires. Now return to the center to find the Heroic Gate-Lord waiting, only this time it has been upgraded. Every time you knock a third of its health away a shield will spawn and make this boss invulnerable. To lower it focus fire the Vex major that spawns, which will drop another set of arc charges. Quickly run to the jump pad and hop on it so you can launch over the center of the arena. Hold down the Interact button so you can slam the charge into the roof before you go sailing by it.

Doing this will drop the Gate-Lord’s shield and make it vulnerable to damage until another third is dropped. Repeat this process one more time to put down this tricky boss and obtain extra loot from the chests that spawn. The biggest thing to remember about this Heroic Public Event is that the timer is always ticking, so don’t spend a ton of time shooting the Vex on the islands. Overall, this is a fairly easy Heroic variation if you have others to back you up during the first half of the encounter. 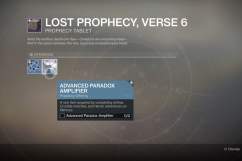 Destiny 2 Curse of Osiris: How to Get Advanced Paradox Amplifier