It has been a long, long time since there has been a decent Yu-Gi-Oh! title on PC. Suddenly, we now have two games to play around with in Duel Links and Legacy of the Duelist. The latter of the two is a full-priced Yu-Gi-Oh! game with a full-fledged campaign that spans over the course of the popular anime. The former is actually a port of the mobile game Yu-Gi-Oh! Duel Links.

Duel Links features a simplified version of the Yu-Gi-Oh! card game you know by having players start with just 4000 life points as well as limiting the board to three monster slots and three trap/spell card slots. The game has an ever-changing meta that requires players to play often so they don’t get left behind.

These changes help the game go quicker for mobile users, which is likely what Konami had in mind. Under normal rules, duels can get pretty lengthy, just look at the anime for example. However with these changes, a duel usually doesn’t go any longer than 10 minutes which helps this become a very user-friendly game. One thing about this game is that it features voice acting from the cast of the anime so you’ll be hearing several familiar voices.

With this being a mobile game, there is a microtransaction portion but you could also grind for the in-game currency and get packs with some regularity. This could end up leaving PC players at a disadvantage since the game only recently released on Steam despite being available on mobile for much longer. If you’re looking for a more complete and traditional Yu-Gi-Oh! game on PC then we’d recommend checking out Legacy of the Duelist.

Of course, none of this would be a problem if you’ve been playing on your iOS or Android device when the game came out. When Duel Links came out on PC last month, there was an option to move your progress over from mobile. This option is still here and you can even move back and forth between the two.

You will be able to get Duel Links fired up on your PC and play there, then head to the bathroom with your phone and be able to pick right back up where you left off. All you have to do is hit “Data Transfer” instead of hitting “Initiate Link” when you start up the game. This should ask you to sign in through your Konami ID which will then link your two platforms together. You used to have to hit “Data Transfer” nearly every time you start up but that shouldn’t be required anymore. The two versions should end up syncing progress on their own now once you link them together.

Since this is a mobile game, it does have some drawbacks of being on PC and one of the main ones is the fact that you can’t make it fullscreen, but there are workarounds to that. We’ll allow that to slide here since the game can be played with your mobile device which is arguably more important.

For more gaming coverage stay with us here at Heavy. 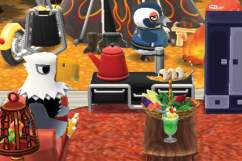