Here are the top five tips/tricks/cheats you need to know for SUP Multiplayer Racing.

1. Boost, Land Tricks, Bump Your Rivals Off the Road and Employ Slipstreaming

• Getting to first place gets harder and harder to do the more you progress. The key to making it to the finish line first means you’ll need to employ several tactics. Boosting is one of them. Near the early and middle portions of a race, just focus on hitting those boost pads instead of using your personal boost. When you’re close to the end of that race, that’s the perfect time to hit your boost three times in a row to get that ultimate speed increase.

• The other tactics you need to employ are landing air tricks. You’ll get awarded Evo Coins for landing tricks via a quick tap of the “Air Trick” button or holding it to perform a full 360-degree maneuver. Ramming your rivals off the road is also a great move worth mastering. When you’re close to a car and see that there’s no rails on either side of the track, that’s the perfect time to change lanes and bump them off the road. And finally, slipstreaming will help you stay close behind other racers and eventually overtake them. To pull this move off, all you need to do is follow any of your rivals. You’ll get a speed boost from sticking close to a car’s slipstream, plus it’ll help you pass them much faster when you switch lanes.

• Over time, you’ll gradually unlock more vehicles. In order to stay competitive, you’ll need to upgrade different parts of your overall ride – its Power, Weight, Speed, Nitro, and Handling. The game itself tends to recommend what parts of a car you should upgrade. If you have the coinage to do so, spend some dough on fulfilling those recommendations. Completely upgrading all the parts of a car leads to it “evolving,” which offers a huge increase to its stats and also unlocks new upgrades to spend Evo Coins on.

• Another recommendation the game makes is the type of car you should bring into a race. If you choose that recommended vehicle for your next race, the number of trophies you’ll be awarded will double. When it comes to power ups, you’ll unlock them via various chests. The Nitro Items Booster, Golden Havoc and Gold Coin Booster will make your push to the finish line for the top spot all the more easier.

• Completing a series of races means getting your hands on a new chest. Keep in mind that you can only keep four chests in your possession at one time and two of their types take several hours to crack open. Silver Chests take 2-hours to open, while the more valuable Golden Chests take about 6-hours to unlock. Immediately start the countdown for a chest opening as soon as the chance arrises. It’s best to refrain from finishing another race series when you’ve hit your max limit of timed chests being held within your possession.

• Once you’ve completed the tutorial races and made it to the main menu, you’ll notice the Facebook icon in the bottom left of your screen. Linking your personal FB account to the game itself grants you a bonus of 80 Diamonds. Earning even more valuable Diamonds can be done by creating your very own race track. The more up-votes you receive from the games community, the more Diamonds you’ll accrue. You’ll be granted a max of seven Diamonds if you cap out at 120 up-votes. Completing certain events in first place also gets you Diamonds, too.

5. Be Prepared to Watch a Lot of Videos…

• The one aspect of SUP Multiplayer Racing you’ll come to learn about is its abundance of videos. While it may be an annoyance, it’s worth sitting through each and every trailer that’s presented to you. When you’re given the opportunity to be granted free chests from the main menu, be prepared to sit through a random trailer just to get to them. When you want to clear out the time remaining on a car part upgrade, watch a trailer to do so. When you go into the Shop, tap on the “Energy” tab and watch a video as many times as you’d like to get a dose of 20 Energy. Watching videos also speeds up the unlock time for chests, gets you free chests from the Shop, and helps you get your reward after completing a single race. 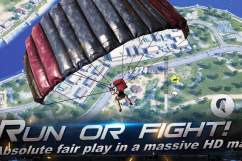 Rules of Survival: Top 5 Tips & Cheats You Need to Know