Here are the top five tips/tricks/cheats you need to know for WWE Mayhem.

1. The Basics Behind Brawling

• WWE Mayhem is all about KO’ing your in-ring adversaries. Doing so means you’ll have to master the art of quick combo strikes, heavy attacks, charged slams, special moves, reversals, parries, and guarding. A sure fire way to get the advantage in any match is by switching up your attack patterns. The best combinations to utilize are ones like two quick attacks leading into a heavy attack and a heavy attack leading into two quick attacks. By the way, never complete a full combo when your opponent is in guard. The AI tends to do the exact opposite during matches, which will usually tire them out and give you an opportunity to land a special move.

• Another opportune moment to land your special move is by launching it after landing two light attacks. Special moves can be interrupted, so don’t just randomly throw them out just cause you have them in stock. When your opponent has access to a special move, save yours so you can easily reverse theirs. And finally, you should focus on landing a charged slam after you successfully parry your foe. Parrying entails blocking your opponent’s strike at the right moment and stunning them.

• When building out your team, keep in mind the type of boosts certain wrestlers give their allies. For instance, adding Ric Flair to a team that features Sting gives the rest of your team a 10-percent boost in dealing damage against their foes. Figuring out the synergies of your wrestlers can be done just by clicking on the “Superstars” tab, selecting any of your talent, and tapping on the “Synergy” tab on the bottom left side. You should also keep in mind what each character class is strong and weak against. Refer to the list below to see who beats what when it comes to what happens in the ring:

• Once you get through your first Season, you’ll have already completed a number of tasks. Those completed tasks will bring some big loot your way. Proceeding through each Season helps you gain new Player Levels. Leveling up in that regard helps you acquire some worthwhile prizes. Along with more loot, gaining new Player Levels unlocks new modes. At Level Three, Versus Mode becomes playable. And at Level Five, playable Events become a thing. Both of these modes tend to bring even more amazing rewards your way. Free loot can be acquired after a certain time limit expires, so logging in everyday should be a big priority for more dedicated players.

• When beginning a new Season, you’ll be given the option to take on three difficulty modes – Beginner, Normal, and Superstar. When starting out, you should focus more on beating more Beginner difficulty modes. When your team of Superstars grows a bit stronger, hop into “Events” and level them up even more. That means at Player Level 5, knock out some Timed Events to better prepare yourself for the next Season. After Player Level 5, try and see if you can succeed at beating Normal difficulty Season modes. Beating Superstar difficulty gets you the biggest rewards, but try taking them on when your team is ready to do so. That means you should have a few 4-star rated wrestlers on your team and enough healing supplies (which tends to show up every four hours) to keep you alive.

5. The Proper Ways to Upgrade 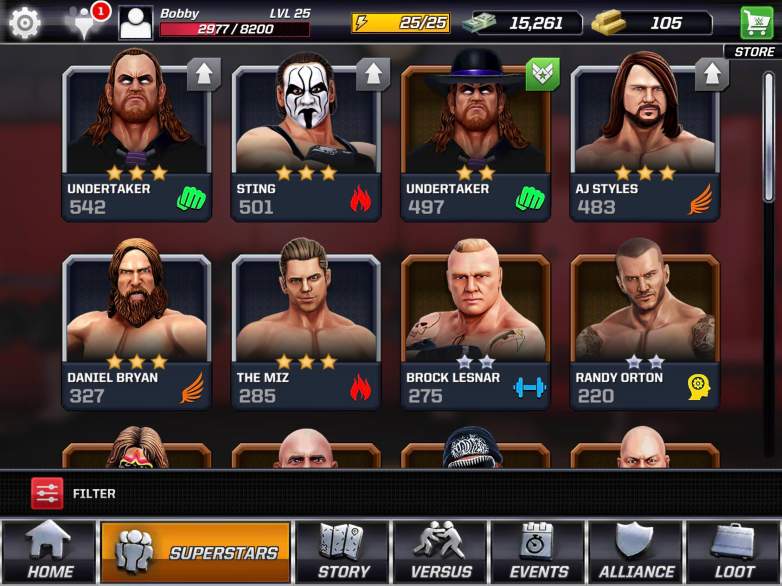 • Wrestlers are ranked from one-star to a max of five-stars. During your earlier playthrough the game, you’ll have to get by with a few one- and two-star rated Superstars. Upgrade these guys as much as possible during this period to get through the starting Seasons in Story Mode. Once you start attaining some three- to five-star level talent, it’s best to reserve your upgrading efforts for them over your lower level wrestlers. The cut off time for leveling up one-star wrestlers is when they start requiring the type of materials that are specific to their character class. You should always make sure you upgrade a strong wrestler from each character class, too. 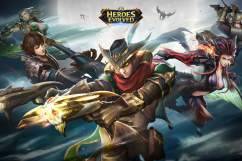