Overwatch‘s 27th hero, Brigitte, has been announced and people are kind of losing their minds a bit.

The reaction so far on Twitter has been almost universally joyful, which is great to see on a social media platform known for sarcastic comebacks and hot takes. People are especially excited over her support/tank mixed role, which features healing, buffs, and barriers as well as sweeping attacks and stunning shield bashes.

Now it looks like I've got someone else to main ❤️ #Brigitte

#Brigitte Highlight! Look how crazy she is ? i love her! #Overwatch pic.twitter.com/kEc43tFI0O

#Brigitte abilities. Basically she is a Rein/Torb hybrid that heals?!?! I’m so here for this. pic.twitter.com/TicXvrrKhm

SHE BIG AND STRONK
I LOVE HER WITH MY WHOLE HEART#BRIGITTE #HERO27 pic.twitter.com/JF3aO1eGMJ

According to the official Overwatch website, Brigitte wields a Rocket Flail which can strike multiple opponents with its extended range. Her repair pack heals allies and any health healed over maximum is converted into armor. The Whip Shot ability has Brigitte throw her flail a long distance, dealing damage and knocking enemies away from her (or perhaps towards teammates for easy kills). Her Barrier Shield looks like a more compact version of Reinhardt’s shield which can be chained into her Shield Bash ability where she rushes forward and stuns any enemy she comes into contact with. Her ultimate is Rally which makes her move faster and provides all nearby allies with armor that lasts until it is removed by damage.

[NEW HERO – NOW AVAILABLE] Brigitte Origin Story | OverwatchMeet the engineer turned valiant squire who fights on the front line to protect her allies: Brigitte. Begin your watch: http://buyoverwatch.com Like us on Facebook: http://www.facebook.com/playoverwatch Follow us on Twitter: http://www.twitter.com/playoverwatch Join us on Instagram: https://www.instagram.com/playoverwatch2018-02-28T18:01:57.000Z

According to the website, Brigitte Lindholm is the youngest daughter of Torbjörn and the first to take up her father’s interest in engineering. She eventually grew to be as skilled as her father, only she specializes in armor and defensive systems while Torbjörn specializes in weaponry. She was also influenced greatly by Torbjörn’s close friend and her godfather Reinhardt, who taught her about chivalry and tales of heroes. After Reinhardt retired from Overwatch after its fall and decided to become a kight-errant, Brigitte joined him as his squire. She not only took care of Reinhardt’s armor but Reinhardt himself, keeping his overenthusiasm in spite of his aging body in check. Eventually she became a warrior in her own right to further support Reinhardt and anybody else who needs her assistance.

News of a new Overwatch hero came last week when the game’s Twitter account posted a nugget of lore about Operation White Dome. Back then it was speculated that the new hero would be someone called Emre Sarioglu. Then a Story Update was posted on the Overwatch forums containing a letter from Torbjörn to his wife, Ingrid, mentioning their unborn daughter and the fact that Reinhardt would become her godfather. Then images of blueprints of what would later learn are Brigitte’s Rocket Flail and Shield appeared on the Twitter account. Brigitte also appeared in the short film Honor and Glory as well as the holiday comic Reflections.

Are you excited about Brigitte? Let us know in the comment section below.

For more Overwatch news, guides, and more, check out our tag on Heavy.com. 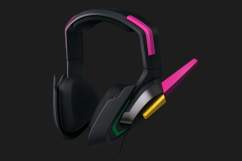