Develop Omega Force has stuck to its guns and continued to pump out games that abide by the Dynasty Warriors mantra – “hack ‘n slash ’till you can’t hack ‘n slash any more.” For those of you who’ve been with the series since its transition from a fighting game to a beat ’em up, this ninth entry will seem like the next logical step in the franchise. New features pop up in hopes of pushing the gameplay past its repetitive nature, such as a vast open world, a wealth of side activities, and new combat options. But only one of those fresh ideas manages to give this tired sequel just a little bit of excitement. Dynasty Warriors 9 is an ambitious ruler who’s goals are clear, but who’s execution leaves a lot to be desired.

The historical yet fantastical plot points of the game don’t deter much from what’s been presented in past entries. Once again, your chosen warrior is placed within China during the Romance of the Three Kings saga. Since there’s a huge selection of powerful characters to choose from, there’s several perspectives of the game’s war torn history to play through. The telling of the plot is done through a flood of uneventful cutscenes and corny English dialogue however, plus it takes far too long to progress through just one of the many characters’ campaigns. The adventure of a sole warrior will definitely lose you after a while due to those rampant issues. And with so many unlockable warriors to choose from, this problem will probably keep you from pursuing their overly long Story Mode playthroughs. Picking a random warrior for some Free Mode slices of action is the most preferred way of play for this entry.

The biggest change to come with Dynasty Warriors 9 is its implementation of a open world structure. Gone are the days of simply moving from one huge mission to the next. Now you can freely traverse parts of feudal China and choose to progress however/wherever you see fit. This major innovation for the entire series may sound great in theory, but it doesn’t work as well as it should. Visually and mechanically, it has its fair share of limitations. The environments look far from impressive, hundreds of enemies suddenly disappear if you move a few steps away from them, and the character/horse movement animations still look choppy and unnatural. There’s a bunch of new side activities to make this open world layout a bit more interesting, such as fishing, hunting, rare item collecting, hideout customization etc. While the implementation of these extra tasks are commendable, their simple mechanics don’t do enough to make them stand out in any way.

Dynasty Warriors has always shined in the combat department and that’s still the case here. As I’ve mentioned before, there’s a huge amount of warriors to collect and upgrade. Much of the fun from this ninth main entry comes from taking them out onto the battlefield and mastering their play style. Mashing the light and heavy attack button will still push you towards victory, but a host of new combat maneuvers makes things even more impactful. There’s new counter abilities, unique actions that reveal themselves when a character’s using their preferred weapon, and unique Trigger Attacks. All of these fresher methods towards wiping out nameless soldiers and other powerful warriors makes the combat proceedings as fun as ever. Yes, they do get old and stale after a while. But that problem usually comes with the whole Dynasty Warriors package. Longtime fans know the deal and will probably be more content with it since the battles are a bit more fun and open-ended.

Dynasty Warriors 9 clearly makes an attempt to evolve the series and make it realize its full potential. The move towards open world progression is a great idea, but it’s hampered by a litany of graphical/technical hitches and half-baked side activities. The main campaign can grow tiring due to the overly long playthrough of a single character and the tired plot retellings of the Romance of the Three Kingdoms saga. Sure, the hack ‘n slash mechanics have been improved and remains the main pull of this new sequel. But it’s simply not enough to convince non-fans to take Dynasty Warriors more seriously. The diehards will flock to it, of course. But they may even be disappointed with its lackluster quality as well. 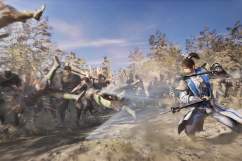