Whether you’re skulking through the shadows or talking it up with nobles, eventually you will find yourself in a sword fight. Given how dangerous battles can be, it’s critical that you master the art of blocking so you can minimize your damage taken. This is easier said than done as foes will attack quickly and often with multiple strikes. Blocking every blow will take a lot of skill and practice, even for skilled players.

You will learn to block very early on in Kingdom Come Deliverance, as there is a high chance you’ll get in a fist fight with a drunk. To simply block just hold the left bumper which causes Henry to raise his arms slightly and absorb incoming blows. Where you actually block is tied to the five-pointed star icon that appears on the enemy you’re fighting. If an opponent has their blade raised up high, you’ll want to shift your blade so it’s also in the upright position. That way if they strike from above you can hit the left bumper and block their blow.

However, Kingdom Come Deliverance won’t directly tell you where someone’s strike will come from. It’s up to you to visually determine where the enemy will launch their attack from. This may take some practice, especially since most soldiers or bandits will chain multiple strikes. Try to predict their movements and block accordingly. If they strike diagonally, there is a good chance that opponent will then try to slash upwards from that side.  Don’t beat yourself up if you do end up getting hit, as this is going to happen sometimes regardless. This combat system can be pretty tricky, so just practice and eventually you will get the timing down.

There is also an additional blocking mechanic called Perfect Blocks which let you knock an enemy’s blade away. Performing this move is far trickier and will not be available to players until they have the combat training session in the main story. Once it’s unlocked, a Perfect Block is activated by blocking an enemy attack right as they launch it. This is indicated by a green shield icon that will briefly appear right as a foe goes to strike you. If you hit LB during this time and are blocking in the same direction of the enemy’s attack then you’ll perform a Perfect Block.

Not only will a Perfect Block cost zero stamina if perfectly timed, but it deflects a foe’s attack completely. This will give you a very brief window to counter strike your foe and get a few good slashes in. Because of this, we highly recommend you practice the timing and try to always Perfect Block when possible. Finding windows to attack your opponents is quite difficult, so being able to make a brief opening can save you a lot of trouble. If you are looking to have a more aggressive and combative experience in Kingdom Come Deliverance you’ll need to master this skill first. 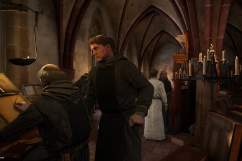 Kingdom Come Deliverance: How to Get and Make Saviour Schnapps