The NFL and Epic Games are once again collaborating with each other to introduce NFL skins into Fortnite.

Now, you might already know that there are a set of skins featuring the NFL already in the game, but now they are expanding upon that with some added cosmetics that’ll give people who already who them reason to get excited.

On November 25, these new cosmetics will hit the item shop and you’ll notice the jerseys have been complete redesigned to fit with the new look of the current NFL jerseys.

Here’s what you’ll need to know about these new designs and how you’ll be able to get them. 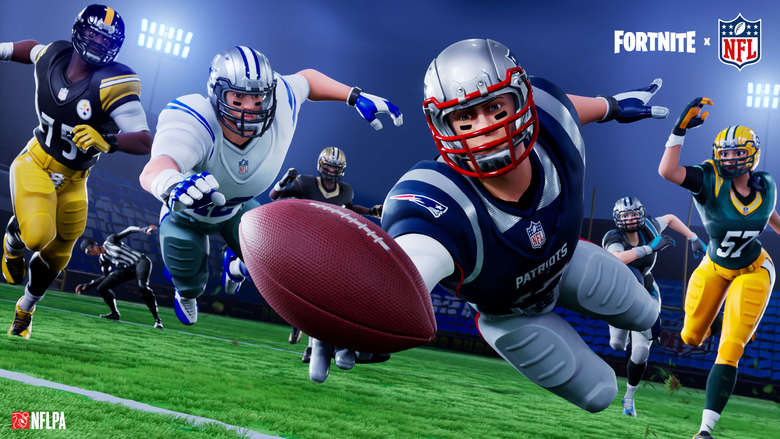 Epic Games / NFLNew NFL cosmetics are on the way.

Just in time for Thanksgiving, Epic Games will be debuting the new NFL styles this Wednesday.

On top of the redesign, there will also be a new back bling for players to get. It’s not yet entirely clear if current owners will get all of the new stuff for free or if they’ll have to purchase it.

These back blings, called Logo-a-go-go, will allow you to sport any of the 32 NFL teams logos on your back, which lets you take your fandom to a whole new level.

Of course, you’ll still be able to change your jersey number, and you’ll also be able to toggle whether you want a reflective visor on your helmet or not.

NFL Comes to Rocket League Too

Fortnite isn’t the only Epic Games title getting the love either as the joy will also be spreading over to Rocket League.

Given how successful the Fortnite and NFL partnership was, it’s not surprising to see the NFL want to crossover into other mainstream games like Rocket League.

Currently, all we know is this will happen later on this year with no firm date given. There’s a little over a month left in the year, so this partnership will certainly have to happen quite first if they want to hit the deadline they gave for themselves.

If you’d like to read the entire announcement regarding the new NFL content in both of these games, you can do so here.

READ NEXT: Why People Think Galactus Is Creating Another Fortnite Black Hole

Read More
Fortnite, Gaming News
The Fortnite NFL skins are getting an overhaul.