Getty LeBron James during a 2018 game against the Boston Celtics.

LeBron James’ net worth is $400 million, as estimated by Celebrity Net Worth. James earned a combined income of $86 million in 2017, from his salary and endorsements.

Though he’s one of the highest paid athletes in the world, James is frugal with his money. He also gives much of it to charity.

Here’s what you need to know about LeBron James’ net worth, salary and endorsements:

1. LeBron James’ Salary Is One of the Highest in American Pro Sports 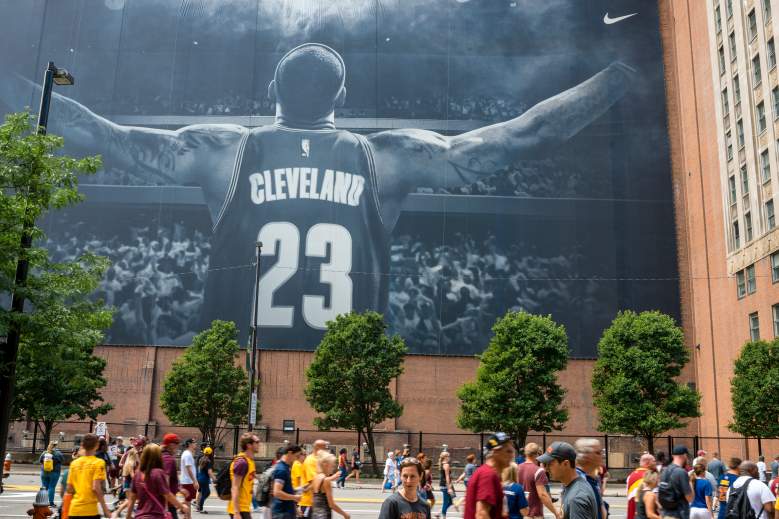 Cleveland fans walk in front of a LeBron James mural located on Ontario St. during the Cleveland Cavaliers 2016 NBA Championship victory parade and rally on June 22, 2016 in Cleveland, Ohio. / Getty

In 2017 LeBron James made $86 million, according to Forbes. At the time, he was the second highest paid player in all of sports with a salary of more than $33 million, behind only Cristiano Ronaldo. In his 15 seasons in the NBA he has earned $234 million. The only NBA player to earn more than James in the 2017-2018 season is Stephen Curry. James is the third NBA player to earn more than $30 million per season. Michael Jordan and Kobe Bryant were before him. James’ current contract is a three-year contract worth $100 million.

He is number 10 on Forbes’ Celebrity 100 list, number two on the World’s Highest Paid Athletes list, an All Star Alumni on the Forbes 30 Under 30 List, and number 39 on the America’s Richest Entrepreneurs Under 40 list.

James grew up in and played high school basketball in Ohio, and was selected by the Cleveland Cavaliers in the 2003 draft. He was named Rookie of the Year that year, and set a record for prep-to-pro players in his first regular season game, scoring 25 points against the Sacramento Kings. In 2007, he took the Cavaliers to their first NBA Finals. In 2010, he caused controversy by leaving the Cavs to join the Miami Heat. He did this in an ESPN feature called The Decision, which drew backlash. After four seasons with the Miami Heat and winning back-to-back championships in 2012 and 2013, James moved back to the Cavaliers. He took the team to the Finals in 2015, 2016, and 2017, winning the championship in 2016–the first for the Cavaliers in 52 years.

Aside from playing basketball, James appeared in the movie Trainwreck. It’s not clear how much he was paid for the role (he plays himself), but he received great reviews for his acting skills. The New Yorker said he was the funniest person in the entire comedy.

2. LeBron James’ Endorsement Deal With Nike Might be the Biggest In History

In 2015, signed lifetime deal with Nike thought to be worth more than $1 billion. The deal accounts for a large amount of his worth. Aside from wearing Nike gear and appearing in the company’s advertisements, he also has his own Nike shoe line. Among NBA players with shoe lines (including Stephen Curry and Kevin Durant), James’ line is the best selling.

James has also worked with Coca-Cola, Kia Motors, McDonald’s, State Farm, Dunkin Donuts, Microsoft, Baskin Robbins, Samsung, Intel, Verizon, and Beats by Dre, among others. His deal with Sprite (part of Coca-Cola), is worth $2-3 million a year. He has starred in a few Sprite commercials and ads, and even helped create a limited-edition flavor called Sprite LeBron’s Mix.

He endorses Beats by Dre but also owned 1% in the company when it was first founded, earning him $30 million when Apple bought the company for $3 billion.

3. LeBron James’ Business Sense Is Right Up There With His Basketball Skills

James was an early investor in the quickly growing chain Blaze Pizza. The chain has grown from two to two-hundred franchises (mostly in Chicago and Florida) in just four years, partly thanks to James’ endorsements. It was named the second-best pizza chain in a recent Harris Poll, beating Pizza Hut (which has 7,000 franchises). To invest in Blaze, James walked away from a $15 million dollar contract with McDonalds.

Had to stop by my favorite place to eat. Nothing like @blazepizza!! Before, less than 5 mins later After! Gone baby gone! If u in the Columbus area check it out on 1708 N. High St as well as many other locations across the US. #Yummy #BestPieYouCouldGet

He also owns a production company, Springhill Entertainment, with his business manager Maverick Carter. The company’s website describes its mission as this: “SpringHill Entertainment creates compelling stories for television, features, and digital. We pride ourselves on incubating, developing, and producing work that speaks to a cross-cultural audience.” Springhill is currently remaking of the 1990 hit “House Party”. Its first project was a documentary called “More than a Game,” which focused on James’ high-school career.

The company also produces cartoons, one of which is the popular web series “The Lebrons”, which promotes positive messages of encouragement and inspiration to young people. Proceeds from the show benefit the Boys and Girls Clubs of America. While launching the web series, James said, “The LeBrons provides me with an opportunity to reach kids through entertaining and meaningful messages about how important it is to do well in school, respect their parents and friends, and be involved in the community”.

Springhill Entertainment  also produces ESPN films and works with HBO on a comedy show about friends who work in a sneaker store.

James also owns digital video company, called Uninterrupted, which raised $15.8 million from Warner Bros. Entertainment Company and Turner Sports. It was launched in 2014 to give his fans, “the uncut, unedited version right then and there of what my thoughts are.” The platform allows athletes to tell their stories to fans through a confessional series.  “The best thing about Uninterrupted is there are so many creative opportunities for athletes to tell their stories”, James said.

James has a bond with another entrepreneur and investor–Warren Buffet, one of the richest people in the world worth $73.5 billion. Buffet told ESPN that the two keep in touch via email, and though they have decades of age difference between them, they get along well “It’s very unique,” Buffet said.

Despite being a multi-million dollar player, James has agreed he’s the “cheapest guy” in the NBA. He told ESPN he refuses to turn on data roaming or spend money on apps. “No, I’m not doing that,” he said. “I’m not turning on data roaming, I’m not buying no apps, I still got Pandora with commercials

He does spend money on some things though. James recently bought a $23 million mansion in Brentwood, California. The home has three stories, is more than 15,000 square feet, and is decorated in white marble. It has two kitchens, two master bedrooms, a pool, a gym, a basement theater, a massage room, and an auto gallery. He also owns a seven-acre estate and a 30,000 square foot, $9.2 million mansion in Akron, Ohio.

Cars stored in the “auto gallery” include a Porsche, a Jeep Wrangler, a Camaro, a Ferrari F430, a Lamborghini Aventador, a Hummer H2, a Mercedes-Benz S63 AMG, a Dodge Challenger SRT, a Maybach 57S, and a 1975 Chevrolet Impala. 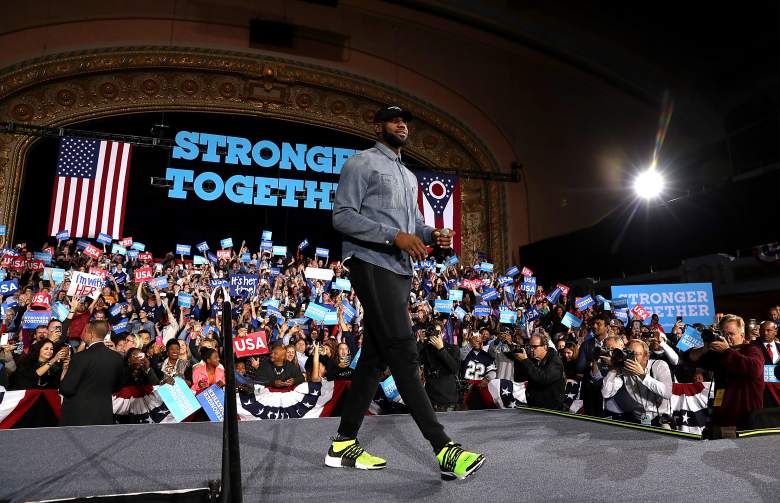 LeBron James walks on stage during a campaign rally with Democratic presidential nominee former Secretary of State Hillary Clinton at the Cleveland Public Auditorium on November 6, 2016 in Cleveland, Ohio. / Getty

James started the  “I Promise” program in 2015 in partnership with the University of Akron. The scholarship provides four-year tuition fees and the university’s service fees for qualifying students. He believes in giving back to his community, and said “it’s the reason I do what I do. These students have big dreams, and I’m happy to do everything I can to help them get there. They’re going to have to earn it, but I’m excited to see what these kids can accomplish knowing that college is in their futures.” The charity will spend $41 million to cover 1100 students. The university also renamed its education department the LeBron James Family Foundation College of Education.

The LeBron James Family Foundation, his philanthropic organization, aims to support young adults and children to improve their lives through recreational opportunities and education. The foundation partnered with Akron Public Schools to establish the “I Promise” school, a school using hands-on learning and other approaches to keep kids who might otherwise fall through the cracks in school. It also started After-School All-Stars, which provides after school programs to keep children safe and engaged in sport or other activities.

James also supports the Boys and Girls Clubs of America ($2.5 million of the proceeds from his Decision special went to the organization), the Gabrielle’s Angel Foundation, ONEXONE, and Children’s Defense Fund. In 2016, he donated $2.5 million to a Muhammad Ali exhibit at the Smithsonian National Museum of African American History and Culture. Of Ali, he said: “I think of him every day. Without his passion and goals and morals, I don’t know if I’d be sitting here today talking to you about it.”

He’s also vocal about his political views. He was a strong Obama supporter and  donated $20,000 to his campaign. In 2016, he also supported Hillary Clinton, James introduced her at a rally in Ohio, where he endorsed her. Of white nationalist rallies in Charlottesville, Virginia, he said on Twitter: “It’s sad what’s going on in Charlottesville. Is this the direction our country is heading? Make America Great Again, huh?”

It's sad what's going on in Charlottesville. Is this the direction our country is heading? Make America Great Again huh?! He said that??‍♂️

Of Trump, he said, “the no.1 job in America, the appointed person is someone who doesn’t understand the people.” He called some of President Trump’s comments “laughable and scary.”