Baffert is looking to win a Triple Crown at the Belmont Stakes this weekend, sending his horse Justify to race in the third leg of the competition. If Justify can pull off a win, he would be the second horse to win Baffert the coveted Triple Crown. Baffert’s champion horse, American Pharaoh, won the Triple Crown in 2015.

Bob Baffert’s net worth is $10 million, according to an estimation by Celebrity Net Worth. He has earned the majority of his money working as a horse trainer. In addition to his yearly salary, Baffert has had several champion horses over the course of his career, earning millions of dollars in purse money thanks to their success.

1. Baffert-Trained Horses Have Earned More Than $276 Million Over the Course of His Career

Over the course of his career, Baffert has trained horses that have earned more than $276 million, according to Equibase. His horses have won 2,848 first places finishes in 12,689 starts.

In the 80s, Baffert was just getting his feet wet in the business, and was bringing in a few thousand dollars here and there. In 1989, he earned more than $150,000 for the first time, and he’s been making a name for himself ever since. In 1991, he won more than $1.4 million, and that number was more than doubled by the mid-90s.

Baffert horses have earned more than $11 million so far in 2018 alone. If his champion horse, Justify, is able to pull off a win at the 2018 Belmont Stakes, Baffert will see a nice boost in his income. With trainers earning 10 percent of their horse’s winnings, Baffert is in an excellent position to cash in.

Baffert’s highest earning year to date was 2017, when his horses raked in $21,112,912. Horses like Solomini, Hoppertunity, and Collected helped him get there by each earning him about $30,000 in their respective finishes.

Two years earlier, Baffert worked with a very special horse. American Pharoah was bred and owned throughout his racing career by Ahmed Zayat of Zayat Stables. The colt won the Kentucky Derby with a time of 2:03.02, a length from Firing Line and Dortmund. Baffert earned 10 percent of the race’s $2 million purse.

American Pharoah went on to win the Preakness Stakes two weeks later, finishing the race with a time of 1:58.45, and earning Baffert 10 percent of the race’s $1.5 million purse.

To close out his incredible Triple Crown run, American Pharoah won the Belmont Stakes, becoming the 12th Triple Crown winner in history — and the first since 1978. Baffert earned approximately $150,000, following that incredible win.

“It’s very emotional. I was hoping it would happen. I just feel like I have a very special horse. He’s the one who won, it wasn’t me,” Baffert told Forbes after the race.

3. He Owns a $4 Million Home in La Canada Flintridge, California

When Baffert isn’t busy training horses, he’s spending time at home with his family. He owns a 4-bedroom, 4-bathroom home in La Canada Flintridge, California, a city in Los Angeles County. The home is estimated to be worth more than $4 million.

According to public record, the home was purchased for $1,850,000 back in May 2010. The beautiful estate appears to have been custom built for Baffert and his family. The home boasts 5,500 square feet of living space and sits on .63 acres.

The area is well-known to celebs, who have sought out property there for years. Other famous people who own or have owned homes in La Canada Flintridge include actor Vince Vaughn, who dropped $3.925 million on a 5-bedroom home back in 2013, while Adam Carolla and his wife, Lynette, moved to the neighborhood in 2015.

Other celebs who have lived in La Canada Flintridge include Billy Ray Cyrus, Kevin Costner, and Angela Bassett.

4. A Horse Named Arrogate Won Him the Most Money

Foaled on April 11, 2013, Arrogate was sired by the Breeders’ Cup Juvenile winner Unbridled’s Song. Arrogate’s dam, Bubbler, was also a successful racehorse, who won six of nine career races. Arrogate was bred by Clearsky Farms before being sold to Juddmonte Farms and sent to Baffert to train in California.

Arrogate won the 2016 Travers Stakes, setting a track record in his first stakes appearance. He went on to win the Breeders’ Cup Classic that same year. Months later, he won the 2017 Pegasus World Cup, setting a new track record there, before heading overseas to race in the the Dubai World Cup, finishing in first place.

After winning the Dubai World Cup, Baffert made a bold statement, saying that Arrogate was the “greatest horse since Secretariat.”

In November 2017, Arrogate finished 5th at the Breeders’ Cup Classic and was retired. Baffert had a great run with Arrogate, and will undoubtedly always remember the horse.

Baffert earns the majority of his money training horses and winning horse races, but he has also earned some money for other, more strange, things.

In 2015, for example, Baffert was paid $200,000 just to be photographed with the Burger King mascot sitting behind him. It all went down at the Belmont ahead of American Pharoah’s big Triple Crown win.

“The reason we did it was because the money goes to charity,” Baffert told Time. Baffert’s wife, Jill, told the outlet that the money was indeed donated, and “would be directed to causes like post-career assistance for jockeys and racehorses.” 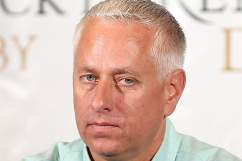 Todd Pletcher’s Net Worth: 5 Fast Facts You Need to Know