Bow Wow went on an explosive Twitter rant Monday morning, criticizing bloggers and gossip websites and claiming that he wanted to give away all his money. “Ima quit all this s—t,” he wrote. “Down size my home. Sale [sic] everything. And go to work at gamestop. Id probably be the happiest man in the world. trade my cars in and buy a probe.”

The rapper also said that he would use an app to give money to whomever wanted it. “Im cash apping all my money away today,” he wrote. “So if you want some free money y’all can have it… lets see if you think money makes you happy.”

The confusion surrounding Bow Wow’s claims has led many to question how much money he’s currently worth. According to Bankrate, he has an estimated net worth of $1.5 million. Read on to learn how he earned his fortune and how much his recent stunt will cost him.

Bow Wow released his first studio album, Beware of Dog, at the age of 13, and it quickly established him as a commercial force; debuting at number eight on the US Billboard 200 and eventually going double platinum. His success continued throughout the 2000s, as he released two gold albums and two additional platinum albums. His last release was 2009’s New Jack City II. To date, Bow Wow has sold over 10 million albums and 14 million digital copies worldwide.

In addition to his album sales, Bow Wow has also had three top ten hits on the US Billboard Hot 100: “Let Me Hold You” featuring Omarion, “Like You” featuring Ciara, and “Shortie Like Mine” featuring Johntá Austin and Chris Brown.

Despite his commercial success, Bow Wow has expressed his dissatisfaction with rapping in recent years. “I always said I’d retire from music before 30,” he tweeted. “I just can’t see myself at 30 years old rapping. Made over 20 million off rap. Why be greedy? I’m good with everything I accomplished. I made it to the White House.” Bow Wow announced that his final studio album will be titled NYLTH. There has yet to be a confirmed release date.

Rumors of Bow Wow’s financial woes first began in 2012, when it was revealed that he only takes home $4k a month from his record label, Cash Money. According to TMZ, creditors had been after the rapper years before his finances were made public. Bow Wow reportedly leased a 2005 Ferrari F430 back in 2008, and within a year, the leasing company sued him for falling behind on his payments.

Despite these reports, the rapper claimed that his financial status was not as bad as it seemed. “I love it, I just laugh at it,” Bow Wow said when asked whether the “broke” rumors bothered him. “One thing about me, I’m a smart guy. Very smart. Things that I do, are for reasons. Things that I don’t do are for reasons. So for myself, I’m comfortable, very comfortable. For me, it’s all about the work. I really don’t read blogs — I don’t really read blogs at all because that’s not why I’m in the [rap] game at all.”

As far as rumors, those are people’s opinions,” he continued. “Until you see me on a corner with a cardboard box saying I’ll tap dance for food for canned goods, then you can say that [I’m broke].”

Bow Wow ran into more financial scrutiny when he was ordered to pay child support for his daughter Shai. According to TMZ, Bow Wow’s former girlfriend Joie Chavis asked for $3k, but the rapper told the judge that he was only making $4k a month between his public appearances and his record contract with Cash Money. He claimed that he was leasing a jeep and that he only had $1,500 in his checking account at the time.

What Bow Wow failed to mention at the time, however, was that he had just signed a six-month contract to host the popular BET series 106 & Park. The contract stated that he would take home an additional $200k, which he was forced to make public after his court appearance. On the heels of the 106 & Park signing, Bow Wow was ordered to pay Chavis a whopping $11,500 in back child support.

Living Don’t judge me. Im living in peace and all i want is peace.

In addition to Bow Wow’s child support, the rapper was hit with a 2016 lawsuit. According to The Jasmine Brand, he used clips of adult film star Celine Tran (aka “Katsuni”) dancing on a pole and put them in the music video for 2013’s “Drank In My Cup.” Tran claimed that Bow Wow never got her permission to use the footage, and promptly sued him for damages.

The rapper reportedly never showed up to court, and was hit with a default judgement on top of the pre-existing lawsuit. He later claimed that Tran attempted to collect on her $80k judgement by coming after his company Faze 2 Entertainment, and that she obtained the judgement without properly serving him, so it should be voided.

After some deliberation, the judge sided with Bow Wow, and voided the $80k judgement. However, the rapper was still forced to deal with the initial lawsuit. Despite claims that he did nothing wrong and that the lack of consent on Tran’s part was not his fault, he was forced to pay a total of $7,065 in sanctions.

5. He Claims That He Gave All His Money Away on Cash App

Bow Wow took aim at his critics on Twitter, criticizing gossip sites for exploiting his personal life.“I hate all you f**king bloggers too! Shaderoom I f**k with. All you other gossiping a*s hateful sites F**K YOU!” He wrote. “SMASH OR PASS BULLS**T I WOULDN’T F**K YOU UGLY I SHOP AT LANE BRYANT B**CHES EVER! F**K YOU!”

Afterwards, the rapper turned his attention towards his fans, and claimed that he was going to give away all his money so that he could show people that money doesn’t equate to happiness. “Im cash apping all my money away today,” he said. “So if you want some free money y’all can have it… lets see if you think money makes you happy.”

Bow Wow also claimed that he wants to work at GameStop. “Down size my home. Sale everything. And go to work at gamestop. I’d probably be the happiest man in the world. Trade my cars in and buy a PROBE.”

Several fans have responded to the rapper’s tweets asking for money, but it is unclear whether he plans to make good on his promise. 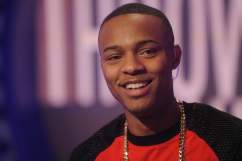 Bow Wow Explodes on Twitter, Threatens to Give Away His Money