Luke Perry has died. The actor passed away at St. Joseph’s hospital after complications due to a stroke. He was 52. Perry was a popular television actor whose career spanned four decades and several beloved shows like Beverly Hills 90210 and Riverdale.

In the wake of Perry’s death, some fans may be wondering how much the actor was worth. According to Celebrity Net Worth, he had an estimated net worth of $10 million. Learn more about Perry’s income and how he liked to spend it below.

1. Perry Auditioned for 215 Roles Before Landing His First Acting Job

Perry was born to a middle class family Mansfield, Ohio. According to the Sun Sentinel, he moved to Los Angeles shortly after high school to pursue a career in acting. He was unable to find acting roles, however, and spent his first few years working as a paver.

He struggled to make ends meet, and moved around to various places, including Huntington Beach, Long Beach, and Downey. In a 1990s interview with Whoopi Goldberg, Perry revealed that he moved to New York after struggling in Los Angeles and had even less luck there. He claims that he auditioned for a whopping 215 acting gigs before finally landing a TV commercial.

Some of Perry’s earliest acting roles include the music video for Twisted Sister’s “Be Chrool to Your Scuel”, and the daytime soap operas Loving and Another World in the late 1980s.

2. ‘90210’ Producer Aaron Spelling Paid Perry’s Salary Out of Pocket During the First 2 Seasons

Perry is best known for starring as Dylan McKay in the 1990s soap Beverly Hills 90210. While his performance made Perry a teen idol, network executives were initially reluctant to cast him. 90210 producer Aaron Spelling was adamant on casting Perry, and took his case to the head of Fox, Barry Diller.

Diller said that he couldn’t force his executives to pay an actor that they didn’t want, but that Spelling could pay for him out of his own pocket if he so chose. Spelling did just that, and Perry’s salary for the first two seasons of the show were payed by Spelling. Perry was eventually brought on to the network payroll for season three, according to Legends Revealed, which is where he stayed for the next several years.

Perry made several charitable donations during his career. In 2017, Perry joined forces with the advocacy group Fight Colorectal Cancer as a means of supporting its ‘Strong Arm Selfie’ campaign. The campaign encourages  social media users to share a photo of themselves flexing a bicep and using the hashtag “#StrongArmSelfie”. Bayer Healthcare pledged to donate $1 to the charity for every photo shared.

Perry also participated in Western Wishes, which helps grant wishes to children with terminal illnesses. “It’s about those kids and making sure they get some love and attention and some light shining on them. You just can’t say no to that,” he explained to American Cowboy. “The first time she asked me to do it, I was happy to participate and it’s something I talk to other people about. It’s definitely worthwhile. I’ll never forget meeting Amberley Snyder—she’s just unforgettable. They’re all fantastic!”

4. Perry Felt That Money Could Bring Out the Worst In People

During a promo interview for the series Windfall, Perry discussed the role that money plays in his life and why he feels its important to not get hung up wealth. “Sometimes it’s really a great thing, sometimes it’s less than great,” he explained. “A lot of times money will allow who you really are to come to the surface.

“And if that person happens to be dishonest or have something bad in their heart, chances are when they’re rich they’re gonna think it’s okay to act upon it,” he added. “Having money definitely lets you know who your friends are. And it will let you know who they’re not. You’d be surprised who it is that you can and cannot trust.”

Perry’s career was rejuvenated in 2017 when he was cast to play Archie Andrews’ father on Riverdale. Article Bio reports that he had an annual salary of $200K for the series, which is currently in the midst of its third season. It’s not yet known whether Perry’s character will be killed off. Perry often spoke about how much he enjoyed being on Riverdale, and how the series appeals to every kind of viewer.

“Riverdale’s got a little something for everybody,” he told the Hollywood Reporter. “If you’re sick of watching shows where you know exactly what’s going to happen, somebody’s going to catch the bad guy or there’s going to be some forensic data, this show ain’t about that. You’ve got to pay attention, and you’ve got to sort of see and you’ve got to have an imagination to think about who could’ve done what, and I like that. It’s participatory.” 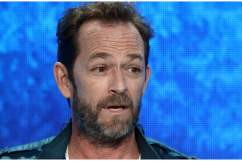 Luke Perry Cause of Death: How Did the Actor Die?