Chance The Rapper isn’t the only one in his family with musical chops.

The Grammy winner’s little brother, Taylor Bennett, is an also a emcee, and has been building a solid reputation since his 2013 debut The Taylor Bennett Show. Last summer, he delivered a dazzling freestyle on Sway in the Morning’s Five Fingers of Death, and now, he’s announced the release of his latest project, Restoration of an American Idol.

The free EP will be a star-studded affair, with features from Jeremih, Lil Yachty, Raury, Luke Tennyson, as well as production from CEO Beatz and Atlanta figurehead Mike WiLL Made It. Bennett has released the promotional single “New York Nights” featuring Stro & Jordan Bratton, to build anticipation before the project’s release tomorrow on February 24th.

The project centerpiece ,”Grown Up Fairy Tales,” will also sport a guest verse from his superstar older brother, Chance (born Chancellor Bennett). The siblings previously collaborated on the 2015 song “Broad Shoulders” and its accompanying short film. Speaking on “Fairy Tales,” Bennett told AllHipHop that the song was “supposed to be put on a Mike WilLL album around the time of Acid Rap,” and that “It’s one of my favorite songs.”

Bennett will also be headlining his first set in Milwaukee on March 23rd, and you can click here to purchase tickets. In the meantime, check out the full tracklist and credits below. 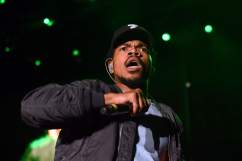