Ariana Grande performs on stage during the 29th annual NYC Pride: Dance On The Pier on June 28, 2015 in New York City. (Photo by Neilson Barnard/Getty Images)

After days of teasing on social media, Ariana Grande has finally debuted the music video for her latest single, “Everyday,” featuring Future.

The pop singer, who’s currently on her Dangerous Woman World Tour, tweeted a link the video just as the 2017 Academy Awards came to a close, and was subsequently followed up with a similar tweet from Future. The video finds Grande singing on the street, the sidewalk, and in a laundromat, where bystanders of different race and gender suddenly begin kissing.

The intimate gestures only get more intense from there, as the same bystanders begin engaging in acts that can at the very least be described as “suggestive.” It’s clear that Grande is going for a political statement of acceptance through sexuality.

Future also drops by to offer a few slick words while walking around an office cubicle that’s equally frisky. Check out the full video below.

The music video has also garnered some positive feedback from fans online, many of which have already voiced their praise on Twitter. Check out some of the highlights below.

That wonderful video clip I loved too much was simply perfect @ArianaGrande I love you too much you look wonderful
❤@1future #everyday pic.twitter.com/kG5q2L5LWN

@ArianaGrande Everyday music video is ok amazing and represents many sexualities, body types, races, and ages proud of you 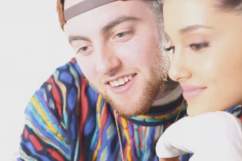