Meek Mill has had a rough couple of years. From his heavily-publicized feud with Drake, to his ugly breakup with fellow rapper Nicki Minaj, he’s been subject to one criticism after another. Mill (born Robert Williams) hasn’t helped his case, getting into online spats with everyone from his former girlfriend and The Game to industry veterans like Oschino of State Property.

Mill’s last release, Dreamchasers 4 furthered this descent, as it failed to connect with fans and music critics alike. But with his fanbase pulling for a return to form, and the escalating buzz behind his latest snippets, things appear to be on an upswing. Here are five fast facts you need to know about Meek Mill’s upcoming mixtape Dreamchasers 4.5.

Mill released Dreamchasers 4 on October 28, 2016. The free mixtape was received indifferently by critics, with Pitchfork claiming that he was “caught between his old life and and his new one, between superstar and street rapper,” and HNPP saying that “A few very strong tracks tentpole an otherwise tedious, scattered listen.” Perhaps feeling the heat of these comments, Mill quickly announced his plans to release Dreamchasers 4.5 the following month, complete with an Instagram post that included a photo of him as a child and the caption “YOUNGBULL WIT A DREAM!!! #DC4.5 COVER ART DROPPING ANY DAY.”

“Any day” actually turned out to be four months from the mixtape’s announcement, as Mill unveiled the album cover on Instagram on February 7th. The image, of an infant Mill in his mother’s arms, ties into the artwork of the previous Dreamchasers installment, which retextured a photograph of him as a teenager with an orange color scheme.

2. There Was An Alleged Tracklist Leaked

Weeks after the announcement of Dreamchasers 4.5, Mill reportedly posted two separate tracklists on his Snapchat account. According to OnSmash, one tracklist tallies up to 14 tracks, while the other consists of 15. While it is unclear as to why Mill would release two separate credits for the same project remains to be seen, he does ask his followers which they prefer, leading us to believe that he is determining which tracks will make the cut.

Either way, the alleged features (Akon, Young Thug, YG, Travis Scott, Future, Rick Ross) on both do offer some undeniable promise on paper. Check out the second one below.

3. There Could Be A Nicki Minaj Diss Record

To say Mill’s relationship with Nicki Minaj ended poorly is a gross understatement. The former couple not only parted ways on the romantic front, but allowed their pettiness to surface on social media, where they regularly mocked each other and sided with their reputed enemies. Mill joined in mocking Minaj after Remy Ma released the diss record “Shether” against her. Minaj fired back on the songs “No Frauds” and “Regret In Your Tears,” with the latter even having a guest verse from Mill’s sworn enemy, Drake. 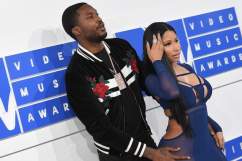 Is Nicki Minaj Song ‘Regret In Your Tears’ About Meek Mill?

In the wake of these releases, however, Mill has played it quiet, causing many to assume that he will address Minaj on the new mixtape. There was even a Snapchat of Mill rapping along to an untitled song in the car, which many felt to have lyrics subliminally aimed at his former girlfriend (and her ex Safaree Samuels). This wouldn’t be the first time Mill included a diss record on a full-length project– Dreamchasers 4 included “Litty,” a blatant attack on Drake that featured Tory Lanez.

4. There Have Been Multiple Song Snippets

While he’s yet to release the full mixtape, Mill has been willing to share snippets of it on his Instagram account. This first happened in January, when Mill uploaded a video of him with the caption “DC4.5” and a blaring, menacing beat playing in the background. A second video surfaced not long after, which saw Mill showing off his chains while jamming to what sounds like the sung chorus on one of his unreleased tracks.

The “R.I.C.O.” rapper continued his musical tease on Sunday night (April 2), releasing three separate videos with the caption “When the beat drop say AMEN! I’ve been on some patch sh*t… new sh*t on the way!!!” Among the songs previewed, each carry the aggressive energy that Mill has become known for. Check out these recent snippets below.

5. It Is Rumored For Release This Month

The release date for Dreamchasers 4.5 has proven the most pressing issue for Mill fans. Many believed the mixtape would be out by the end of 2016, but with countless delays and leaked snippets, things have definitely became more confusing. Mill offered something close to an answer on RevoltTV in February, saying “I got a lot of new music coming out. I’ma say 30, 40 days and I’m gonna jump back in the mix, you heard me? I was supposed to drop today but it was a lot of clearances and issues and sh*t like that/ It really would have got nasty but you know, we give ya’ll 30, 40 days.”

Mill went on to say that “We’re gonna let the music talk. DC4 and a baby. We gonna do every motherf**king listening party and crack houses all over America. We coming to a hood near you. DC4.5, n*gga, the streets is talking and we here, n*gga.” Given the revelation that the project nearly came out in February, and that listeners have “30, 40 days” to get ready, it seems very likely Dreamchasers 4.5 will be released in April.