Shawn Mendes is a singer/songwriter from Canada. He started getting attention in 2013 when he began posting song covers of other artists on the former cellphone app, Vine. These covers caught the attention of executives at Island Records and landed him a record deal. Soon after his signing, Mendes released his self-titled EP, and two albums titled Handwritten and Illuminate.

In his short time in the music industry, Shawn Mendes has been able to put together a discography of memorable songs that capture is heartbreak and falling in love. Below is a list of Shawn Mendes best songs.

“Stitches” is Shawn Mendes third official single from his debut album Handwritten. Commercially, “Stitches” is Mendes’ most successful song peaking at number four on Billboard’s Hot 100. The song also reached number one on the Mainstream Top 40. “Stitches” is a heartfelt and slightly dramatic take on losing the love of your life. The lyrics give an insight of the heartbreak the 18-year-old singer may have gone through, “I thought that I’ve been hurt before/But no one’s ever left me quite this sore/Your words cut deeper than a knife/Now I need someone to breathe me back to life.”

What makes this song so great is the roller coaster of emotions. The verses are slow and somber and backed my simple electric guitar chords. However, once the chorus comes in it becomes a more uptempo rock and roll inspired mixture of drums and guitars. With lyrics like You watch me bleed until “I can’t breathe/I’m shaking falling onto my knees/ And now that I’m without your kisses/I’ll be needing stitches” there’s no wonder why “Stitches” has become Shawn Mendes most successful song to date.

“Mercy” is Shawn Mendes’ second single released from Mendes sophomore album, Illuminate. Mendes continues his song style of conveying agonizing emotions over a mixture of guitars and drums with “Mercy.” Similar to “Stitches” each verse in “Mercy” is somber and romantic, “You’ve got a hold of me/ Don’t even know your power/I stand a hundred feet/But I fall when I’m around you.” Once again, the hook is where the song comes to a climax, the crashing drums come in and Mendes sings his heart out, “Please have mercy on me/Take it easy on my heart/Even though you don’t mean to hurt me/You keep tearing me apart.”

The music video for “Mercy” is the perfect capsulation of the emotion Mendes is conveying in his lyrics. Since the song is about a girl hurting him, the video follows how is coping with his pain. We see Mendes drowning in a car and towards the end of the video, during the crashing drums on the hook, Mendes finally has had enough and throws the drums over. Shawn Mendes is typically quiet about his love life but it makes you wonder who the female is that’s making him lose his mind on all these songs.

“Treat You Better” was the lead single from Shawn Mendes second album, Illuminate. The song is about a girl in a relationship with a guy who isn’t treating her right and how Mendes can treat her better than him. What makes this song so great is that it shows a different tone in Mendes’ music. This song isn’t about his pain from heartbreak but rather a sweet symphony of how Mendes can woo a girl,”I’ll stop time for you/The second you say you’d like me too/I just wanna give you the loving that you’re missing/Baby, just to wake up with you.”

“Life of the Party” was released on both The Shawn Mendes EP and his debut album Handwritten. Released in 2014, “Life of the Party” was one of the first songs Mendes released since becoming famous on Vine. Given the title of the song, the track is surprisingly not a party anthem but rather a piano ballad about self-worth. In an interview with Seventeen Magazine, Mendes described the song as “super happy, but it’s also not depressing. The lyrics represent being happy with yourself and figuring out who you are and who you want to be.”

Learn more about “Life of the Party” here.

Shawn Mendes collaborated with then Fifth Member Camila Cabello for “I Know What You Did Last Summer.” The song was released as a single from Mendes’ re-released Handwritten album. With dating rumors between Shawn and Camila swirling around the release of the song, the mostly acoustic jam became a huge success. “I Know What You Did Last Summer” peaked at number 20 on Billboard’s Hot 100.

The writing process for “I Know What You Did Last Summer” started backstage at one of the concerts for Taylor Swift’s The 1989 World Tour. In an interview with MTV, Camila said “We were just backstage. There were like 100 people in my dressing room at the time, and it was madness back there, but I had this guitar and I was just jamming out, and we basically wrote a pre-chorus and a chorus in like 30 minutes.” This song was the perfect match-up between two of the hottest young stars in music today.

Learn more about “I Know What You Did Last Summer” here.

Download “I Know What You Did Last Summer”: Amazon – iTunes – Google Play 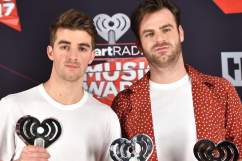