After months of teasing and rumored announcement dates, Kendrick Lamar‘s new album is less than 24 hours away from its official release.

Announced via iTunes pre-order last week, Lamar’s album, titled DAMN., will be released on Friday, April 14th. You pre-order will enable an automatic download of the album when it is released, as well as an instant download of the lead single “Humble.” But what time does the album actually come out?

According to The Independent, Apple Music says that DAMN. will be available for streaming and download as early as 8 p.m. PST tonight (11 p.m. Eastern). Unlike Drake‘s More Life, which suffered numerous delays and an eventual premiere on OVO Sound Radio, Lamar’s album and its arrangement with iTunes means that it will be readily available at its designated time. The album will also be available on Apple Music and Spotify, though it remains to be seen whether it will be available for streaming on Tidal.

Since the announcement of the album’s release date, Lamar has revealed the cover art for DAMN. as well as the tracklist, which consists of fourteen tracks and a sparse amount of guest features– especially in comparison to his last official project, To Pimp a Butterfly (2015). Check out the full tracklist below, which lists vocal appearances from Rihanna and U2, with production ranging from Mike WiLL Made-It and BADBADNOTGOOD to 9th Wonder.

Lamar discussed his the direction of DAMN. earlier this year, telling T Magazine “I think now, how wayward things have gone within the past few months, my focus is ultimately going back to my community and the other communities around the world where they’re doing the groundwork,” he said. “To Pimp a Butterfly was addressing the problem. I’m in a space now where I’m not addressing the problem anymore.” He went on to say, “We’re in a time where we exclude one major component out of this whole thing called life: God.”

The rapper also explained his writing process, and the prospect of having children in the near future: “One day, I may have a little girl. And it’s a girl in particular—funny you said that. She’s gonna grow up. She’s gonna be a child I adore, I’m gonna always love her, but she’s gonna reach that one point where she’s gonna start experiencing things. And she’s gonna say things or do things that you may not condone, but it’s the reality of it and you know she was always gonna get to that place. And it’s disturbing. But you have to accept it. You have to accept it and you have to have your own solutions to figure out how to handle the action and take action for it.” 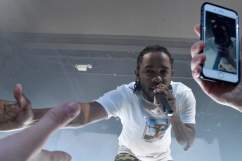 Here Are The Production Credits For Kendrick Lamar’s New Album