With less than 24 hours to go until Jay-Z releases his new album 4:44, fans are understandably starved for new info. Hov has been extremely secretive about the album during its rollout, preferring to keep track titles, guest features, and even the meaning of “4:44” a mystery.

Despite this secrecy, an alleged tracklist for 4:44 has now leaked online. Appearing as a screenshot, the color and design of the tracklist matches the artwork that’s been associated with the album thus far. At a concise 14 tracks, the screenshot includes the only song that’s been confirmed to appear on the album, “Adnis,” along with thought-provoking song titles like “War On Terror” and “Black Hoodie.”

Later songs appear to make reference to the title of the album, “4:44,” while “Big Woulda Said…” implies that we’ll be hearing an homage to Jay’s former friend and late emcee The Notorious B.I.G. Check out the alleged tracklist below.

While these features are definitely jaw-dropping, with guys like Kendrick Lamar, Kanye West, and Chance The Rapper, their names here are also somewhat confusing. Instead of being credited by their normal moniker, the tracklist refers to them by nickname– Lamar is “K Dot”, Chance is “Lil Chano”, and Jay’s wife Beyoncé, arguably the biggest name in music, is simply “The Queen.”

It may be a good indicator as to its authenticity (or lacktheirof). Twitter isn’t sure what to make of the tracklist either, as can be seen by some of the reactions below.

Naw…… I just saw the track list for Jay Z new album……. ?THIS MAY BE HIS BEST ALBUM EVER

If that 4:44 tracklist is real I’m gonna end it all

If that 4:44 track listing on the TL is real then I most certainly approve.

How authentic is this? https://t.co/waFOx1SMhl

Another issue here is the inclusion of Swizz Beatz. In a recent interview with International Business Times, the producer revealed that he is nowhere to be found on the album. “[Jay] comes to me with a lot of things and I’m honored he looks on me in that respect,” explained Beatz, “When I heard his album I didn’t feel like I needed to add anything to it because it was already there.”

Earlier this month, Billboard reported that Chicago veteran No I.D. will be producing the entire album. Jay and No I.D. have previously worked together on songs like “D.O.A. (Death of Auto-Tune)” ,”Run This Town” and “Holy Grail” , which won the Grammy Award for Best Rap/Sung Collaboration in 2013.

UPDATE: 4:44 has been released on Tidal, and the official tracklist featuring Frank Ocean, Damien Marley, and Jay’s mother Gloria Carter, isn’t exactly what we were led to believe. Check it out after the jump.

To listen to the album for free, iHeartMedia is currently playing the full album in exclusive 35-minute Album Roadblocks. The album will continue to play across iHeartMedia’s Urban and Rhythm formats until 12:01 a.m. ET July 1, featuring audio of Jay explaining the album. To learn how to stream it on Tidal, click the link below. 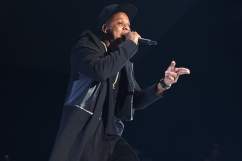