Hov has returned. On the heels of his induction into the songwriter’s hall of fame, Jay-Z has released his new album 4:44 and fans are justifiably thrilled. But how can you stream it online?

According to Tidal’s official website, the album is exclusively available on Tidal. Variety reports that it will eventually be released on platforms like Spotify or Apple Music, but it looks as though that won’t be for a couple weeks. Fortunately, for those who don’t have a subscription, there are still a few different ways to stream the album instantly. Tidal offers two free trial plans on their site, both of which come with a 30 day trial.

The first trial costs $9.99 a month and includes standard audio quality and minimal features. The second costs $19.99 a month and includes lossless audio quality, along with “expertly curated” features. By signing up for either trial, you will be able to stream the new album. If you don’t wish to continue their subscription, all you need to do is cancel before your trial has expired, and you will not be charged.

In addition to the free trial, the album will also be available to those who are Sprint customers. This means anyone with a Sprint phone will receive an invitation to become a Tidal member for six complimentary months, during which they will have access to 4:44 and the rest of the platform’s catalogue of over 48.5 million songs.

“We’re giving customers an incredible opportunity to be among the first to experience [Jay’s] new album 4:44,” says Sprint CEO Marcelo Claure, “Our loyal, existing customers, and customers who switch to Sprint, can experience the album exclusively, plus access a complimentary six-month trial of TIDAL HiFi, giving them access to content they can’t get anywhere else.” Check out the official tracklist for the album below.

For those who aren’t Sprint customers, but still want to participate in this offer, you can switch to Sprint and become part of the company’s “Clean Slate” program. According to Tidal, this means Sprint will pay off your balances on your existing wireless contract and provide a free new phone. For additional terms and details, go to sprint.tidal.com. You can check out one of Sprint’s video teasers for the album below.

If you don’t want to subscribe to Tidal or become a Sprint customer, there is a third way to stream 4:44. According to Variety, the album will be streaming on iHeartRadio across 160 Pop, Rhythm and Urban radio stations in the United States, where fans will be able to hear all ten songs throughout the day.

You can click here to listen to the album. The streaming lasts until 12:00 a.m. Eastern on July 1st. iHeart will also air exclusive audio of Jay discussing the meaning behind each song.

UPDATE: The album is currently available to download for free at 444.tidal.com. According to Complex, all you have to do is enter the voucher code “SPRINT.” It is unclear how long this offer will last. 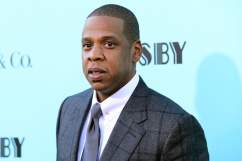