Pat Monahan of Train performs at MGM Grand Garden Arena on May 12, 2017 in Las Vegas, Nevada. (Photo by Ethan Miller/Getty)

Pat Monahan, the lead singer of the band Train, will be singing the National Anthem before Game 1 of the NBA Finals between The Golden State Warriors and the Cleveland Cavaliers.

Monahan, a Bay Area native, has sung the National Anthem on several occasions over the years, and in preparation for what is sure to be an impassioned, patriotic performance, here are five fast facts you need to know about the singer, his career, and his personal life.

1. He Has Sold 10 Million Albums With Train

Train, founded by Monahan, Jimmy Stafford, Scott Underwood, Rob Hotchkiss, and Charlie Colin, struggled for the first five years of their existence, toiling in relative obscurity until their 1998 single “Hey Virginia” exploded and became a top 20 hit on the Billboard Hot 100. The self-titled album that accompanied it was eventually certified platinum the following year. Since then, Train has continued this successful path with singles like ‘Drops of Jupiter” (2001), which won two Grammy Awards in 2002, and “Calling All Angels” (2003), which helped their third album My Private Nation go platinum.

Still, their biggest success wouldn’t arrive until 2009, when they released the album Save Me, San Francisco. The album contained the smash hit “Hey Soul Sister,” which charted at number three on the Billboard Hot 100 and went six times platinum. To date, Train has sold over 10 million albums and 30 million tracks worldwide.

In 2007, Monahan released his first and only solo album, Last of Seven. Among the album’s guest appearances were singer Brandi Carlisle and Bon Jovi guitarist Richie Sambora. It performed moderately well, as lead single “Her Eyes” peaked at number nine on the Billboard Hot Adult Contemporary Tracks.

2. He Has Dabbled In Acting

In addition to his busy schedule with Train, Monahan has tried his hand at acting, both in vocal and physical form. Starting in 2010, he provided the voice of Driver Dan in the children’s show Driver Dan’s Story Train (no connection to his band). In an interview with CBS, Monahan said “I’m very excited to be driving a different kind of Train as for the voice of Driver Dan. In my house, my daughter wakes up with Sprout every morning and now when she goes to bed with Sprout, she can do it with me as Driver Dan… it will be a lot of fun.”

Programming Senior Vice President Andrew Beecham added “Pat, a dad himself, was thrilled with this opportunity to do something completely different, for an entirely new audience.” Monahan has also made guest appearances on episodes of CSI: NY in 2009 and Hawaii Five-0 in 2013.

3. He Hosts A Podcast

Patcast by Pat Monahan – Episode 49 – Travie McCoySubscribe to keep up to date on Patcast: bit.ly/1677Hrv. Travie McCoy started as the lead singer of the band Gym Class Heroes. He had several huge hits with them, and several huge hits on his own as a solo artist. With Gym Class still active and his solo career moving ahead at the same time,…2014-07-08T19:09:26.000Z

Since 2013, Monahan has hosted his own podcast, titled “Patcast.” On the AudioBoom page for the podcast, Monhan explains his reasons for starting it, writing “Since I have a crazy schedule with my band Train, I don’t really get a chance to meet new people or hang out with my friends. I thought that a good way to do both would be to start doing a podcast called ‘Patcast’ (appropriately so) in which I interview people and sing a song or two with them.”

Monahan added “I hope this can help make your long car rides, commutes to work, or jobs more enjoyable.” Among the guests he has had on the podcast include Rick Springfield, Sir Mix-A-Lot, Travie McCoy, The Wailers, The Fray and Peter Frampton.

4. He Has Been Married Twice

Monahan met Ginean Rapp prior to the formation of Train, when he was playing in a cover band called Rogues Gallery. They married in 1990, and had two children together: Patrick Jr. and Emelia and Patrick Jr. who is currently pursuing his own music career. According to FrostSnow, however, Monahan’s busy touring schedule with Train and rumors of extra-marital relations strained the marriage, and he and Rapp would finalize their divorce in 2006.

Monahan met his second wife, Amber Peterson, while he was still married to Rapp in 2004. In an interview with More, the singer reflects on his state of mind at the time: “When I met her I was not in a place where I wanted to fall in love forever. Yet that is exactly what happened. I remember thinking, I just want to meet some people and have some fun. Instead, I met the girl of my dreams who I instantly knew I wanted to be with forever.” He later dedicated the song “Drive By” to Amber. They have two children together: Autumn Jr. and Rock Richard.

5. He Has Sing the National Anthem Multiple Times

Game 1 of the NBA Finals will not be Monahan’s first crack at singing the National Anthem. In fact, the Train frontman is an old veteran when it comes to the stars and stripes, as he has sung it a total of seven times throughout his career. His first performance was at the Pro Football Hall of Fame Game in Ohio in 2007, but the majority of them have been in his home state of California– including the home opener for the San Francisco Giants in 2011, Game 3 of the playoffs for the Los Angeles Clippers and Golden State Warriors in 2014, and the home opener for the San Francisco 49ers later that same year.

His most recent performance of the National Anthem with at the Rock and Roll Hall of Fame in April, where he got to honor one of his biggest musical influences, and one of the night’s inductees: Journey. 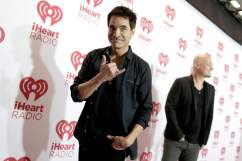 Read More
Music, NBA Finals 2017, Train
Pat Monahan, the lead singer of the band Train, will be performing the National Anthem before Game 1 of the NBA Finals. Learn more about Monahan and his career here.